After graduating from the University of Missouri, I was employed by KFRU-AM, where I hosted a late night radio program, something the program director, Bill Weaver, gave me the opportunity to do during my junior and senior years of college.

Several months after graduation, I was contacted by Channel 17, the ABC-TV affiliate, with an offer to manage their newsroom and anchor the morning newscast. I had also worked at 17 during my junior and senior years, primarily as a studio tech (loading commercials, running the camera in the news studio). The experience I was getting in the real world of radio and television made my school work seem rather dull.

I took the job at 17 and left KFRU, very grateful for their allowing me to be on a the number one radio station in town as a college kid!

After a couple years, and a lot of fun, I ended up leaving 17 (actually, I was fired for demanding that all of my employees get a raise; proves that arguing with the boss can have its consequences!). I landed a job in Reno, Nevada (KOLO-TV), initially as the weekend sports guy, but soon after I became the weekday weatherman and also the producer/reporter for a popular segment on the late newscast known as, Night Scene.  This segment allowed me to interview all the nation’s top comedians and musicians, and even the Reverend Billy Graham.

The Graham interview would change my life. 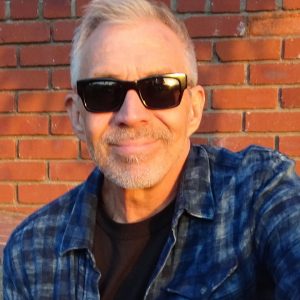 An Interview with Billy Graham

Billy Graham was arguably the greatest evangelist in history. He was in town for three nights of crusades at the Convention Center. His visit to Reno was making all the headlines, so I convinced our boss that we should cover it as a part of Night Scene.

I got the green light and contacted Reverend Graham’s media team and an interview was set up; it was scheduled to last 15-minutes on Wednesday, the day before Graham’s first crusade.

Billy had done a press conference earlier in the day, and was concluding a handful of one-on-one interviews when my cameraman and I arrived. We were his last interview of the day. As our camera guy was setting up Graham asked me about myself. He became very intrigued when I told him I was a follower of Jesus, and I was Jewish.

I was raised in a non-religious family, but our culture and my identity growing up was distinctly Jewish. After witnessing a series of deadly tragedies during my middle school years I became determined to know the God of heaven, and escape the fear and wrath of hell. This revelation finally occurred during my second year of college, thanks to the faithful persistence of a young woman friend, who I was totally attracted to (the same woman who became my wife!).

I told Reverend Graham how this female friend challenged me to read the New Testament during my first year at Missouri. The make-or-break moment for me was in John 14:6, where Jesus says, ‘I AM the Way – and the Truth and the Life; no one comes to the Father except through me.’ After contemplating that statement, I had to decide whether Jesus was a liar, a lunatic-or the Messiah. I chose the latter.

Billy Graham and I ended up spending almost an hour together.

Brian’s interview with Graham, combined with highlights from the Crusade, made up both the Thursday and Friday night editions of Night Scene. A week later Sussman received a letter in the mail.

It was from Billy Graham. He mentioned he didn’t have a chance to watch the interview on television, but some members of his staff did and they really like what they saw. He thanked me for the opportunity to be interviewed and then said something that only in more recent years changed my life. 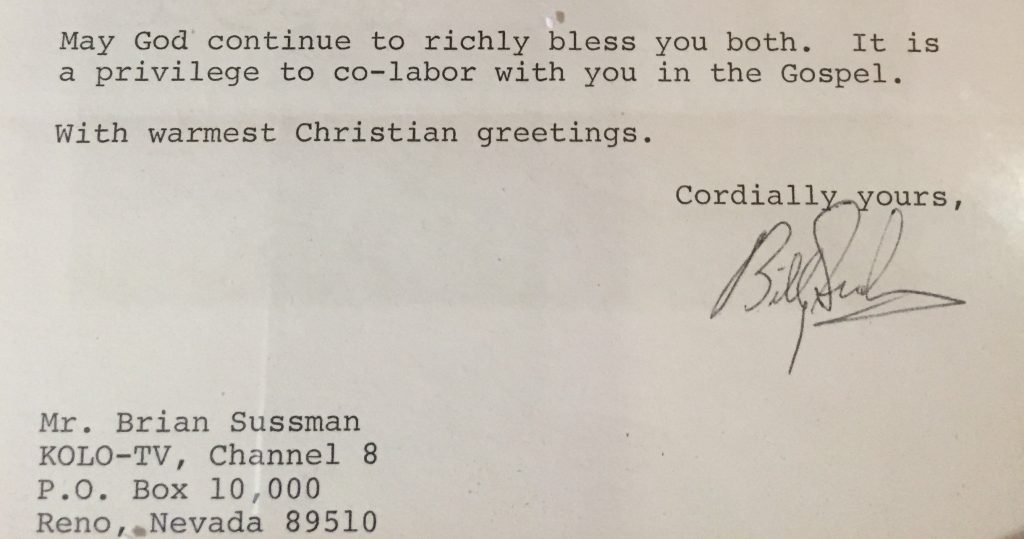 In 2016 I was fishing through a box of personal memorabilia and came across that letter. Billy said it was “terrific” that the Lord had given me such a “great opportunity to witness for Him” in the secular media. He also referred to me as a fellow “co-laborer in the Gospel.” That statement by Billy Graham-one of the greatest evangelists of all-time-calling me a co-laborer, hit me especially hard.”

I’ve always been active and outspoken about my faith, leading Bible studies and prayer groups both in churches, Messianic synagogues, and even in the workplace. But rediscover Graham’s letter motivated me like never before.

All these years later, long after leaving Reno and doing a couple decades of TV and radio in San Francisco, I looked at that letter and felt I needed to live up to the words of Reverend Graham. I made the decision to revamp my website and dedicate its content to what I see as the Bible’s core message: everyone needs another chance to know and follow the One who says, ‘no one comes to the Father except through me.’

For nearly three decades Brian was a top media personality in the San Francisco Bay Area.  For many of those years he was the market’s top television meteorologist and recognized by his peers as one of the most accurate and entertaining in the business.  His accolades include nearly two dozen state and regional awards for “Best Weathercast” from the Associated Press as well as the Radio-TV News Directors Association, a handful of Emmys, and an award of merit from the National Education Association for his enlightening science reporting.   During the 1990s Brian served as the fill-in weatherman on the nationally broadcast CBS Morning Show. 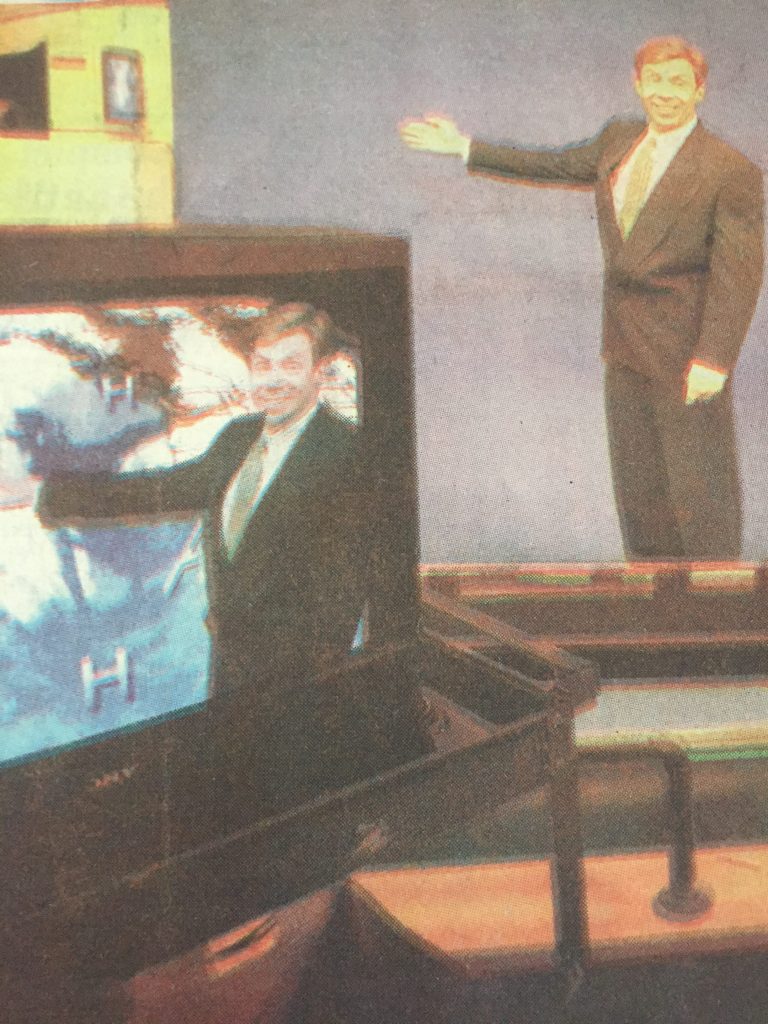 Sussman has also been recognized by the State of California for assisting in the adoption of foster children.  Through his organization, Brian’s Kids, Sussman utilized the airwaves of KPIX-TV in San Francisco to highlight children waiting for adoptive families.  Between 1989 and 2001, four hundred foster children were placed into permanent families thanks to Brian’s Kids.  Even Sussman’s own family (left) expanded via adoption during those special years.

In early 2001, following the adoption of thier fourth child, Brian arranged to leave his contract with KPIX-TV in order to devote more time to raising his kids (getting home at 12:30AM after doing the 11PM news was just not cutting it for the Sussman family). Then on September 11, 2001, Brian was asked by the Bay Area’s Christian radio station, KFAX, if he could fill-in as host of their afternoon talk show, as the regular host was stuck in the Seattle airport due to the air traffic being shut down following the attack on our nation. Brian agreed. Despite the tragedy of that day, the overall program went so well that the station added him to their regular lineup of show hosts.

Later that year, the Bay Area’s top conservative radio station, KSFO, offered Brian an evening drive time show. Success in that time slot led to him becoming the station’s morning host from 2009 through 2019. During his tenure on the Morning Show, Brian was the fill-in host for both two nationally syndicated programs: The Mark Levin Show and the Savage Nation with Michael Savage.

The KSFO Morning Show, with sidekick Katie Green and Producer Sheri Yee, achieved a remarkable success not seen in radio since. People all over the nation listened to the program via the Internet. Though the Morning Show was not syndicated (not heard on scores of other radio stations), it outperformed many syndicated programs through the sheer number of people streaming the show live. As such, The KSFO Morning Show was regularly rated as having the largest Internet audience of any local radio show.

Due to some non-life-threatening health concerns, Brian opted to not renew his radio contract in 2020 so he could catch up on decades of sleep deprivation, spend more quality time with his family and friends, play more drums with a couple of local bands, and eventually launch the Brian Sussman Show: Faith, Family, Freedom Podcast. 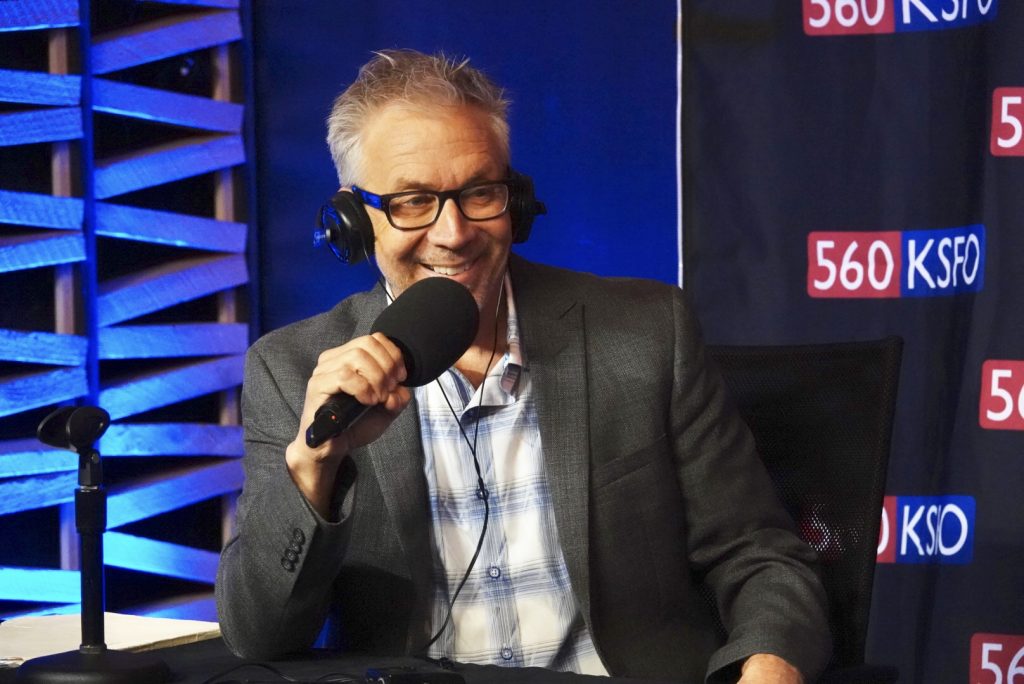