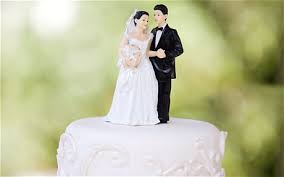 The state of Colorado is arguing in federal court that, despite the U.S. Supreme Court’s recent ruling, its Civil Rights Commission can issue new discrimination charges against Christian baker Jack Phillips, because the panel’s members have been replaced.

The commission found that Jack Phillips, the owner of Masterpiece Cakeshop, discriminated against a same-sex couple by refusing to bake a cake for their wedding. The Supreme Court reversed the decision in a 7-2 ruling in June on narrow grounds, concluding the commission did not employ religious neutrality, violating Phillips’ rights to free exercise of religion.

Phillips has responded with a lawsuit contending his constitutional rights have been violated.

A Colorado congressman has asked the Department of Justice to investigate the state commission.

The state’s second prosecution of Phillips prompted James Dobson, the noted Christian psychologist and founder of the Dr. James Dobson Family Institute, to call for reform of the commission, decrying the new claim as “a continued attack on the First Amendment and religious freedom.” 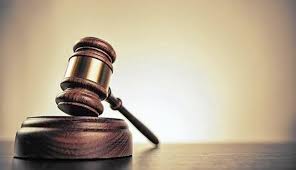 A group of “Red Rose Rescue” pro-life activists – who go into abortion businesses to offer women an alternative and a red rose – went on trial on trespassing charges in Washington, D.C., on Thursday.

Less than 30 seconds later, they were free, with all charges dismissed.

The stunning result was announced by lawyers for Life Legal Defense Fund representing the activists on counts of criminal trespass for their entry into Capital Women’s Services in Washington in July.

It was the first case called by the judge Thursday morning, which LLDF said was unusual. Typically, courts elect to dispense with procedural and other less time-consuming matters before calling up trials on the docket.

The judge asked the parties whether they were ready for trial, and U.S. Attorney Jana Maser, prosecuting the case, said no, as she could not produce any witnesses. Defending the activists was LLDF lawyer John Garza.

“The judge then asked Garza how he would like to proceed. Garza requested a dismissal of all charges, which was immediately granted,” LLDF said.

According to Red Rose activist David Nix, a priest, the hearing took place in less than 30 seconds.

“We are pleased with the outcome of today’s trial,” said Life Legal Defense Foundation Executive Director Alexandra Snyder. “The Red Rose Rescuers are heroes in the pro-life movement, willing to sacrifice their freedom to prevent women and babies from becoming victims of the abortion holocaust. We are honored to stand in their defense and in the defense of the dignity of human life.”

The defense counsel had been prepared to document the dangers to babies as well as women posed by the abortion facility. LLDF said Capital Women’s Services is affiliated with Steven Brigham, a notorious late-term abortion doctor. Brigham has been charged with neglect and fraud in several states for gravely injuring women and was charged with the murder of 10 second- and third-trimester babies in Maryland.

WND reported in another Red Rose case last summer that the activists caused at least 11 women to skip their abortion appointments.

But the judge in the case refused to award the business any damages.

The American Freedom Law Center defended the activists in that case, in West Bloomfield, Michigan.

There also was a team that delivered roses in nearby Sterling Heights, Michigan. 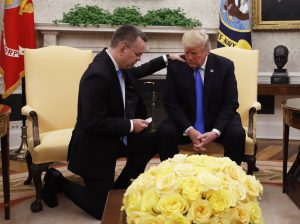 WASHINGTON (AP) — Freed American pastor Andrew Brunson fell to one knee in the Oval Office and placed his hand on President Donald Trump’s shoulder in prayer on Saturday, asking God to provide the president “supernatural wisdom to accomplish all the plans you have for this country and for him.”

Trump welcomed Brunson to the White House to celebrate his release from nearly two years of confinement in Turkey, which had sparked a diplomatic row with a key ally and outcry from U.S. evangelical groups.

Brunson returned to the U.S. aboard a military jet shortly before meeting the president. He was detained in October 2016, formally arrested that December and placed under house arrest on July 25 for health reasons.

“From a Turkish prison to the White House in 24 hours, that’s not bad,” Trump said.

Brunson’s homecoming amounts to a diplomatic — and possibly political — win for Trump and his evangelical base. Coming on the heels of the confirmation of a conservative justice to the Supreme Court, Brunson’s return is likely to leave evangelical Christians feeling good about the president and motivated get to the polls in the Nov. 6 midterm elections.

Brunson appeared to be in good health and good spirits. When he asked Trump if he could pray for him, the president replied, “Well, I need it probably more than anyone ese in this room, so that would be very nice, thank you.”

Brunson left his chair beside Trump, kneeled and placed a hand on the president’s shoulder. As Trump bowed his head, Brunson asked God to “give him supernatural wisdom to accomplish all the plans you have for this country and for him. I ask that you give him wisdom in how to lead this country into righteousness.”

Brunson, originally from Black Mountain, North Carolina, had lived in Turkey with his family for more than two decades and led a small congregation in the Izmir Resurrection Church. He was accused of committing crimes on behalf of Kurdish militants and to aid a Pennsylvania-based Muslim cleric, Fethullah Gulen, accused by Turkey of engineering the failed coup. He faced up to 35 years in jail if convicted of all the charges against him. 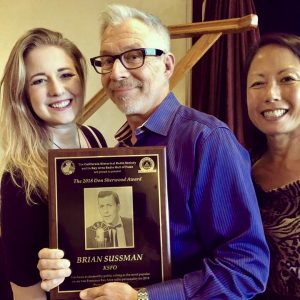 Today I was awarded the Don Sherwood Award for the Bay Area’s Most Popular Radio Host of 2018. My cohorts, Katie Green (news, traffic, and hilarity) and Sheri Yee (producer extraordinaire) where with me, as were a many, many  past and current performers in the Bay Area radio and TV scene.

It’s remarkable to think that of the 110 radio shows broadcasting in the Bay Area, our Morning Show often finishes each month overall (6+) in the top-5,  and in the key demographic (25-64) we often bust into the top-10.  Unheard of for a 5,000 watt radio station doing a conservative show in a liberal city.

However, our online audience is the one that is mind-boggling.  We are often the most listened to local (non-syndicated) radio show in the United States!

THANK YOU, listeners for voting me the top radio guy for 2018.