I grew up in a loving, unique, at times hilarious, secular, sort-of-Jewish family (my dad was Jewish, my mother Finnish).  We acknowledged Hanukah, and we also celebrated Christmas.  We always had a Christmas tree, which my dad dubbed, “the Hanukah bush,” and we excitedly exchanged presents each Christmas morning.

For the first eight years of my life, Mom and Dad did a decent job selling my younger brother and I the Santa Clause spiel.  However the charade awkwardly derailed when I was 9.  My brother and I woke up early Christmas morning to find that Santa had delivered nothing.  I cautiously crept into my folks’ bedroom to share the bad news: we’d been forgotten.

Turns out Dad had been at an impromptu company Christmas party the night before (he was a liquor salesman) and didn’t arrive home until everyone in the house, including Mom, had long since gone to bed.  Apparently it was his duty to set up all the Santa gifts, but (likely from having one too many with the boys) he forgot.

“The keys to the car are on the chest of drawers,” he mumbled. “Check the trunk.”

I collected the keys and led little brother outside our apartment into the parking lot.  We walked to the car and I popped the trunk.  My suspicions, which had been growing for a few years, were immediately confirmed–of course there was no Santa!  Nonetheless we gathered the new toys, carried them inside, placed them beneath the tree, and then tore into them like nothing ever happened.

Despite my secular upbringing deep down inside I knew there had to be more to this Christmas thing than just a mythical chubby fellow with a white beard bearing gifts.  Each year in school we would sing Christmas carols of the spiritual variety.  This could never be accomplished today due to political correctness, but quite frankly some of those songs really stuck with me—particularly, Silent Night.

The following Christmas I decided to go caroling in our apartment complex.  I enlisted my brother to accompany me.  In no time he picked up the words as we went door to door singing, Silent Night. Smiling neighbors opened their doors as the two of us performed.  I didn’t exactly know what the lyrics meant, but I certainly believed them more than I ever did Santa Claus.  Greetings were exchanged.  Cookies and cocoa were offered.  It was wonderful.  I went to bed that night with the song swirling in my head.

Silent night, Holy night
All is calm, all is bright

God used this beautiful hymn to stir my heart and give me hope.  I had just endured the worst period of my young life; in September one of my best buddies had been fatally struck by a car; I had witnessed the aftermath.  I so wanted to believe there was a God who could save me and assure me life in heaven.  Silent Night was a seed that eventually brought faith and love into my life 10 years later, when I finally surrendered to the Savior.

May I encourage you to experience God’s love during this season by singing and listening to the real songs of season, all the more so if you are raising young children.  Santa, Frosty, and Rudolph are cute, but incapable to providing what a longing heart needs—Jesus.

For years I have publicly stated that the government is eventually going to try silence the message of the Christian church.  Generally I thought such a move would involve sexuality and marriage. The scenario would look like this: the church refuses to marry a same-sex couple and will then be billed a “hater church.” Next, legislation is passed to revoke the church’s tax-exempt status.

Now it’s happening on another front–abortion.

California’s Department of Managed Health Care has ordered all insurance plans in the state to immediately begin covering elective abortion. Not the Plan-B pill. Not contraceptives. We’re talking about “elective surgical dismemberment abortion.”

At the insistence of the American Civil Liberties Union, the DMHC concluded that a 40-year-old state law requiring health plans to cover “basic health services” had been misinterpreted all these decades. Every plan in the state was immediately ordered, effective August 22, to cover elective abortion. California had not even applied this test to its own state employee health plans (which covered only “medically necessary” abortions). But this novel reading was nevertheless quietly imposed on every plan in the state by fiat.

The news of this stealthy move is just leaking out.

While California (like the U.S. Department of Health and Human Services, or HHS) exempts churches from its contraceptive mandate, there is no exception to this bureaucratic abortion mandate. This leaves California churches in the illogical and impossible position of being free to exclude contraceptives from their health plan for reasons of religious conscience but required to provide their employees with abortion coverage.

If your pastor is unaware of this, tell him. If he ignores this warning, I advise changing churches.

Forget the Left. Their minds can’t be changed.

However as a Jew who long ago placed his faith in Jesus (Yeshua) as Messiah (the Christ) I am so troubled when I meet younger followers of Jesus (as well as younger Jews not yet following Yeshua) who do not believe Israel has a definitive right to exist. They’ve bought into a gross revision of historical facts.

The first reason that Israel has the right to exist is because of a plethora of archeological evidence.  Every time there is a dig in Israel it does nothing but confirm the fact that Jews have had a presence in that region for over 3,000 years. The coins, the pottery, the historical buildings, the cities, and the culture indicates that the Jewish people have been dominated that region.  From thousands of years ago to present there has always been an uninterrupted population of Jews residing in within the current borders of Israel. In fact, when Israel was granted its independence in 1948 nearly all of land had been legally purchased and settled by Jewish people.

Prior to 1948 the region was known as Palestine. When Jews from all over the world began immigrating to Palestine in large numbers in 1882 fewer than 250,000 Arabs lived there and the majority of them had arrived in recent decades. Palestine was never an exclusively Arab country, although Arabic gradually became the language of most the population after the Muslim invasions of the seventh century. No independent Arab or Palestinian state ever existed in Palestine.

Since its independence in 1948, Israel has fought four wars: The 1948 War of Independence, the 1956 Sinai campaign, the 1967 Six Day War, and the 1973 Yom Kippur War. In all four cases, Israel was attacked. They were not the aggressor. They also won all four wars against impossible odds.

And then there is the Biblical history.

The Lord said to Abram, “Lift up now your eyes, and look from the place where you are northward, southward, eastward and westward: for all the land which you see, to you will I give it, and to your seed forever… Arise, walk through the land in the length of it and in the breadth of it; for I will give it to thee.”

That’s God talking, not me. The Bible also says that Abram dwelt in the plain of Mamre, which is in present day Hebron, and built an altar before the Lord. Hebron is in the West Bank.  It is at this place where God appeared to Abram and said, “I am giving you this land.”

This is not a political battle at all.  It is a contest over whether history means anything and whether or not the word of God is true. 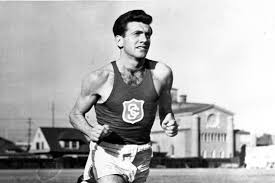 He’s one of my all-time great American heroes and he died peacefully last night at the age of 97. He is Louis Zamperini.

Zamperini was a member of the 1936 U.S. Olympic track and field team who survived repeated, horrid, torture for two years as a Japanese prisoner of war during World War II. I interviewed Louis several years ago on KSFO.  He is the subject of the book, Unbroken. A movie of the same name is due out Christmastime. The book is a must read. I hope the movie does the book justice.

Born in 1917 to Italian immigrants in Odeon, New York, Zamperini moved to the Southern California community of Torrance in 1919 and became a world-class distance runner by the time he graduated from Torrance High School.

His ability and drive to compete on the track won him a scholarship to USC, where, at 19, he became part of a long tradition of USC track Olympians when he made the U.S. team. He was the country’s top finisher — eighth place — in the 5,000-meter race at the 1936 Olympics in Berlin. His ran his final lap in a blistering 56 seconds, prompting Germany’s Adolf Hitler to request a personal meeting with him.

Zamperini retired from competition to serve his country during World War II, becoming a bombardier and in the South Pacific. While on a reconnaissance mission, Zamperini’s aircraft crashed into the Pacific Ocean in Japanse-controlled waters. He and a surviving crew mates spent 47 days adrift on an inflatable raft (a record). Severely blistered by the scorching heat, the men survived by drinking rain water and killing a seagull, the bones of which allowed Zamperini to fashion a crude fishing hook enabling them to catch fish.  Upon making shore in the Marshall Islands Zamperini was captured by Japanese soldiers.

He was a POW for more than two years, during which time he was frequently beaten and tortured by his captors in prison camps, often as payback for being a American Olympian.

Louis shared with me his story of coming to know Jesus Christ as Lord in 1949. Years later he traveled to Japan to meet with his captors and forgive them for the beatings he suffered.

Quite the athlete even in later years, he was often seen skateboarding while in his early 90s.

Louis Zamparini, a great American, now with his Creator.

The following is a continuation of the previous post (written by David Theroux) regarding a man I truly admire, Phil Robertson, patriarch of the “Duck Dynasty” family.

Phil Robertson himself is certainly no lightweight. The Los Angeles Times has called him “a man of legendary individuality, who once passed up an opportunity to sign with the NFL because it might interfere with his hunting.” One of seven children raised in a log cabin in northern Louisiana with no electricity, bathtub, or toilet, Robertson grew up in a poor family living off garden fruits and vegetables; deer, squirrels, fish, and other animals that they hunted and fished; and the pigs, chickens, and cattle that they raised. Nevertheless, in high school he became All-State in football, baseball, and track and received a football scholarship to Louisiana Tech University. At Tech, later football legend Terry Bradshaw was at the time benched as second-string to Robertson, who was star quarterback. And although Robertson chose to quit football in college for the freedom to hunt during duck season, he went on to receive a master’s degree in education, taught school, and became a commercial fisherman. In 1972, the young enterprising Robertson patented his first duck call and created the Duck Commander Company, which has been leveraged into today’s vast fortune and cultural phenomenon that includes Duck Dynasty. His autobiographyHappy, Happy, Happy became a number one New York Times bestseller, and his new book for 2014, Phil-osophy, will share his philosophy of life, as he outlined in an interview before the release of his autobiography…

To enjoy the rest of this enlightening article, click here.