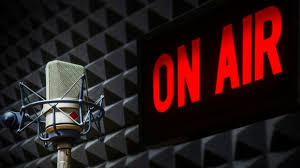 Just a reminder that I am on the radio every Friday!

The program, Straight Talk Sedona, airs live in Northern Arizona from 8:15AM to 9AM. You may listen live, via the KAZM website, or by way of the recorded podcast, which is found at the Straight Talk website.

Straight Talk is produced by Cara Mia, a dear friend and fellow patriot. Cara and I have known each other since our high school days; her late brother, Carl, was one of my best friends.

Straight Talk has become a very influential program in Northern Arizona (and is driving the liberal leadership of that area batty).  Besides commenting on the hard hitting news of the week, we interview top-shelf guests who bring tremendous insight and intrigue into the headlines.  The Straight Talk website will keep you up to date with show topics and guests.

Hope you will join us, every Friday live on KAZM, or anytime via the super popular podcast! 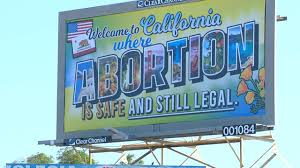 By the way, the billboard is not fake news.  Hopefully you now understand the challenging title of this article.

Even though the Supreme Court decision that overturned Roe – Dobbs v. Jackson Women’s Health Organization – reversed the so-called “right to privacy” that legalized the right to take a baby’s life in the womb, California was undeterred. The state’s overwhelmingly ultra-liberal legislature baked in laws allowing the abortions to continue. The state also insured its future role as an abortion destination (or “refuge” as they are fond of saying) for women to come from states where taking the life of a newly developing baby had been severely restricted.

Governor Gavin Newsom declared California a “Reproductive Freedom State” by proclamation in 2019. At that time, the Dobbs case was on its legal journey from Mississippi to the U.S. Supreme Court.

Since October, according to the Guttmacher Institute, some 66 abortion centers in 16 states have been closed.

When abortion providers like Planned Parenthood saw that Roe could be in trouble they started preparing for what they predicted would be a wave of people coming to California once abortion was made illegal in their states. Sadly, their predictions were correct.  The number of women coming from out-of-state to have abortions in Orange and San Bernardino counties in southern California increased threefold. The Planned Parenthood office serving the region is proud to note they have added nine new rooms where the “procedure” can be performed (“State’s Abortion Demand Surges,” San Jose Mercury News, January 1, 2023).

But California is not satisfied with its status as a destination for terminating a pregnancy via the death of the innocent. As we enter the new year a slate of pro-abortion legislation will take effect, further insuring California as a beacon of access:

– Proposition 1 enshrines the right to choose in the California Constitution.

– Murder no more.  A measure authored by Assemblywoman Buffy Wicks, D-Oakland, AB 2223, also known as the “Infanticide Bill,” formally bans prosecution for failed and terminated pregnancies. In other words, botched abortionists can go free, no questions asked. Under previous law, coroners were required to investigate and register fetal deaths after 20 weeks, unless they are the result of a legal abortion. AB 2223 bars such investigations and any subsequent prosecution.

– No MD required.  Now almost anyone can perform an abortion. Nurse practitioners, nurses, and midwives will be able to provide abortions without loss or suspension of their license under AB 2626, written by Assemblywoman Lisa Calderon, D-Whittier. The bill also prohibits professional boards from suspending or revoking licenses of providers who provide abortion care outside the state.

– Taxpayer financed abortions.  AB 2134 by Assemblymember Dr. Akilah Weber (D-San Diego) establishes the CA Reproductive Health Equity Program which will provide grants to providers who provide uncompensated care to patients with low-incomes and those who face other financial barriers.

All of these new laws have now created the most dangerous place in California: a mother’s womb. Abortion has become glorified by the ungodly maniacs who have produced these wicked laws. It’s a new twist on an ancient pagan practice: child sacrifice.

The horrific ritual of child sacrifice has been committed throughout the world for thousands of years. Generally, the sacrifice of a child was intertwined with the worship of a pagan deity, often a fertility god. Worshipers sought to obtain a blessing from their god(s) or to confirm or complete a vow taken in the name of the god.

Today it’s the fertility goddess of  “Reproductive Rights.” Worshippers are the pregnant women who have been brainwashed to believe sexual proclivity that leads to pregnancy can be honorably absolved through blessing of abortion.

One would think that California, in its  infinite effort to be so compassionate, would offer of free lifetime counseling and psychological therapy for the formerly pregnant women who have been traumatized by the gruesome procedure of abortion. But no, that will never happen. These women, like the babies who never made it out of the womb, are pawns of the goddesses. 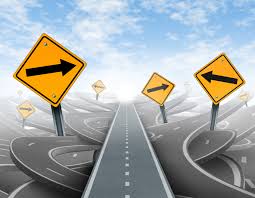 We hear it all the time.

“She’s on her own journey.”

“God has me on a different journey than you.”

This phrasing about a life “journey” is not in the Bible, unless you’re talking about physically traveling from one place to another.

The well-worn maxim, “your own journey,” originated from American author, Ralph Waldo Emerson, who wrote in his essay, Self-Reliance: “It’s not the destination, it’s the journey.”

His essay, intended to convince people to avoid conformity, stressed that for one to truly be significant he or she had to follow their own conscience and “do your own thing.”

Emerson was raised in the Universal Unitarian Church and received a degree from the Harvard Divinity School. The Unitarian Universalist denomination deniesl of the doctrine of the fact that God embodies three distinct persons: the Father, Son, and Holy Spirit (aka the “Trinity”) and they believe that all human beings gain salvation.  According to Universalists, the mere idea someone might go to hell is not compatible with the character of a loving God.

No. Life is not a journey. Life is a destination in that it ultimately will result with either eternal life in heaven, or, well, hell.

Yes, life is a journey, so to speak, along the way, filled with lessons, hardships, heartaches, joys, celebrations, and special moments; but all of those things ultimately lead us to our purpose in life, and our final destination.

The Bible tells us to be heavenly minded, focused on our eternal home: “…seek those things which are above, where Christ is, sitting at the right hand of God. Set your mind on things above, not on things on the earth” (Colossians 3:1-2 NKJV).

Jesus told us, His followers, to invest in heaven – our destination – when He warned: “Do not lay up for yourselves treasures on earth, where moth and rust destroy and where thieves break in and steal; but lay up for yourselves treasures in heaven, where neither moth nor rust destroys and where thieves do not break in and steal. For where your treasure is, there your heart will be also,” (Matthew 6:19-21).

Jesus knows that, as humans, whatever we spent our time, money, and effort on will eventually win our hearts.

This is not a random journey, my friend. This is a real-deal destination in progress. Don’t be distracted with the things of this world and thus loose sight of the eternal destination God has for you.

And don’t give in to the “do your own thing” mentality that this present world has embraced. 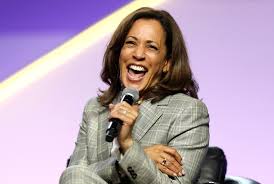 So, this president walks onto a stage… (think set up for a punchline).

President Joe Biden cautiously pads to the podium and stands before members of Congress and VIP guests after being introduced by the queen of cackle, Vice President, Kamala Harris.

Ignoring the teleprompter, the President speaks.  Behind the scenes his aides likely cringe. Biden’s off the cuff moments don’t usually end well–never have actually.

“Thank you, Kamala, for that introduction, and, even more importantly, for your partnership, because it is a partnership.”

Then comes the flub.

“Isn’t she doing an incredible job?  Not a joke.”

Nothing like a little insult humor to kick off your spiel, Mr. President.

Kamala should have turned this moment into a comedy duo. She could have slyly edged up to the podium, presented her toothy grin, and said something cute like,

“You know, Joe, when you leave this office to me (pause)…

“We all know you’re going to go far.

“And I hope you’ll stay there.”

Now that would be hilarious! 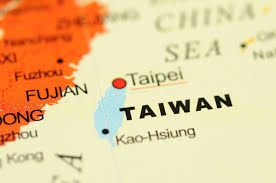