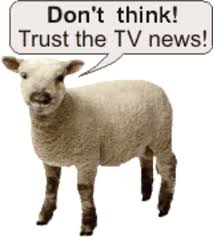 My wife and a sister-like friend were briskly walking near our home on a broad sidewalk adjacent a shallow cliff, where below lays a popular state beach known for surfing.  She and her friend were walking side-by-side, but not too close. They were also not wearing the facemasks mandated by Nancy Pelosi’s nephew, California Governor Gavin Newsome.

“Put on a mask!” shouted a passerby.

“Walk in single file!” shouted another.

It’s amazing how so many people have quickly adapted to the new code of societal ethics and the herd behavior that causes the masses to fall in line.

It got me to thinking about the two medical doctors in Kern County, California—immunologists no less—who were interviewed by local media. After posting the interview on YouTube and drawing 6-million views, YouTube pulled the video.  Why? Because the facts which the doctors presented did not fit the left’s coveted herd mentality.

As I explain in detail in Episode 59 of my Hidden Headlines Podcast, what we’re witnessing is progressive politicians, bureaucrats and policymakers becoming drunk with power as they use a virus to control the masses and change the way we live. In America, they’ve been able to get away with trampling the right of assembly and squelching free speech. Even the right to provide for one’s own physical needs has been stripped. All in the name of a relatively new term that is now a part of the society’s fabric: social distancing.  A term that is ripe with liberal hypocrisy and stained with progressive power.

And then there’s this post I share from a resident of Lagos, Nigeria: one of the largest and most impoverished cities on the planet. The writer says mandatory social distancing would wreak havoc on Lagos.

Lagos is a city of 21-million people and perhaps the largest urban economy on the African continent. Its “informal sector” (as they call it) is crucial to the city’s survival. Street trading and open-air markets are such a fundamental part of the fabric of Lagos. Hawkers, roadside manicurists and hair stylists, waste pickers, food sellers, beers brewers, card dealers, servants,  hair stylists and homeless people who sweep bridges and curbs for a penny or two are among the key players that keep the city functioning. All of these people are dependent on the city’s 24-7 public activity for their livelihoods.

The cost of living in Lagos is also very high, which means that home ownership is the exception for Lagosians rather than the rule. The majority of renters live in extremely close quarters, in a kind of private proximity that mirrors the density of public life.  Traffic, whether pedestrian or vehicular, often looks like a heaving mass, its component parts indistinguishable from one another. In the same way, the front yard or verandah of the average Lagosian rental is invariably packed with people, possessions, shops and, depending on the time of day, multiple naked children being enthusiastically scrubbed clean in large basins.

“In my city, grimy currency notes go from hand to hand throughout the course of everyday life. People sweat on one another in transit. Communal toilets, kitchens and bathrooms are typical in low-income neighbourhoods, and can be shared by as many as 40 people in one building. In the poorest neighbourhoods, sanitation is non-existent because neither piped water nor sewage management systems are available.  In Lagos, about six million people live on incomes earned largely on a daily basis.  This represents millions of families who can only start buying or making meals when the primary breadwinner closes from work on any given day. For such people, the possibility of catching a previously unheard-of illness is a far less dangerous one than the knowledge that not having anything to eat is always a sunrise away.”

If the powers-that-be decided to quarantine and self-distance the people of Lagos the way some of our states, counties, and cities of America are handling the COVID virus, people would die of starvation and who knows what else?

Check out the podcast (on this website, iTunes, Googleplay, or soundcloud , and let’s make it a good week…