As BidenHarris are sworn in: My Final Warning

In the film Lord of the Rings, Gandalf the Great warns his friends as their death seems to be drawing near, exclaiming, “Fly you fools!”

Having been raised by a dad whose father escaped communism, and after 20-years of personally waging battle on the radio in the spirit of those who pledged their “lives, fortunes, and sacred honor” for this nation, and in light of the coup which has allowed evil progressives to plunder the reigns of Washington, D.C., to say I’m concerned for the future of America is a gross understatement. 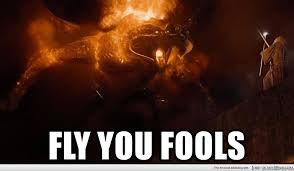 I’ve studied the works of Marx, the actions of Lenin, and the strategies of Alinsky. It’s clear America is on a rapid downslide toward communism. This process never ends well, first for the resistors, then for all those not in the elite class.

Over the past four years millions of Americans, some of them otherwise decent people, have become so filled with hatred for Donald Trump that they are willing to blindly embrace the acute changes that have suddenly been launched upon the millions more who voted for President Trump’s second term. I’m referring to the  “Cancel Culture.” Eliminating avenues for conservative discourse and thus constraining First Amendment rights is now perfectly acceptable. Threatening Trump-supporting business owners with violence is tolerated. Firms firing employees who attended the January 6th march in D.C. is understood.

Friendships and family relations are being torn to shreds.

What’s tragic is these anti-Trumpers are not even aware that their venom and divisiveness is being fueled by a well-tuned propaganda machine driven by their cherished news sources which are purposefully manipulating reports and blacking out news that doesn’t fit into the pro-BidenHarris paradigm.

The American experiment has been viscously hijacked.

That said, based on the totality of my research and observations, here’s what I believe we can expect from the new federal government as their plan rapidly moves forward.

Congress will quickly maneuver to grant Puerto Rico and Washington, D.C. statehood. This will guarantee a total of four new democrat senators and likely six new democrat house members. Any member of Congress voting against this move will be tarred a racist.

The deck will be further stacked against congressional conservatives.

Next, the democrat controlled Congress will add additional seats to the Supreme Court. The goal is to permanently box constitutional conservatives out of federal lawmaking and deepen the democrats’ grip on federal power.

Once the Supreme Court is expanded, Congress will take aim at the Second Amendment. This is where things could become  violent—exactly what the pro-communist strategists wish for.

Simultaneously, the federal government will continue to redefine liberty. They will further erode the First Amendment, including severely curtailing the ability to communicate and gather. They will also use all facets of media for a public relations blitz targeting Trump supporters as an unyielding danger to the nation.  Born-again Christians and Orthodox Jews will also be marked as intolerant bigots. Practicing their faith will be akin to a hate crime. Thus, being a Christian or Jew and/or being a Trump supporter will conveniently allow them to “cancel” you. Not just your social media, but your livelihood too. Left to run its course, your personal property could also be at risk.

Redemption might be found in a federal re-education program. Crazy? Not to former network news superstar Katie Couric, who stated recently to Bill Maher,  “And the question is how are we going to really almost deprogram these people who have signed up for the cult of Trump?”

And for those who refuse deprogramming, Ms. Couric?

Also, over these next two years, China will grow in superiority, Russian will become more conniving, ISIS will rebuild, Iran and North Korea will be emboldened.

All the while our military will undergo castration.

The Great Global Reset will be well underway.

Hopefully, Red States will rise in defiance and challenge the new federal mandates–the question is, how long they will be able to hold out?

Our Republican form of government was designed for a society built on Biblical morality. The blue party is filled with the devil. Ask any immigrant who came to America fleeing communism: they see the writing on the wall and shudder when considering the final act.

Many are now looking to 2024. Perhaps the tide will turn? Perhaps Donald Trump or another populist will run as a Republican and win in 2024? I say populist because the Republican Party is filled with a host of elite, establishment, doers of evil as well.

Trump was never a card-carrying member of the GOP and that’s why so of us many supported him.

And that’s why the left loathes him.

And while I still pray daily for that tide to turn, forgive my pessimism. Barring a miracle (always possible), unless our voting system is overhauled I don’t see how we’ll ever beat the democrats in a national election. Nonetheless, you can bet I’ll be voting against Kamala for President in 2024 (as planned, Joe will likely be long gone from the White House by then).

Here’s my essential advice in the meantime:

Prepare as you would for any long-term natural disaster, including having emergency power and plenty of water.

Get out of debt quickly.

If you are going to continue on social media know that everything you say can be used against you.  Everything is being recorded. Use a private email service and secure search engine. Even then beware. Purchase a short-wave radio, it may be useful in the very near future to hear the real news.

Consider your 2nd Amendment rights while they remain intact . If so, be well-trained and able to make your own “–mm–.”

If you want to know what our enemy is thinking, planning, and scheming, read the Sunday New York Times. If you want a the Cliff Notes version, read the daily AP News headlines.

If able, move to a Red State or region.  Build community with likeminded patriots.

If you’re called of the Lord to remain in a politically hostile area, trust Him for wisdom and provision.

Pray. This earthly battle is actually a heavenly one: For our struggle is not against flesh and blood, but against the rulers, against the authorities, against the powers of this dark world and against the spiritual forces of evil in the heavenly realms. Therefore put on the full armor of God, so that when the day of evil comes, you may be able to stand your ground, and after you have done everything, to stand (New Testament book of Ephesians 6:12).

If you’re not a praying person I invite you to consider the words of Jesus who said, “I am the way, truth, and life, no man comes to the Father except through me” (New Testament book of John, 14:6). This is your time to repent and get things right with your Maker.

The good news? I do believe in that in the near term we will witness a spiritual revival the likes of which will be Biblical in proportion.

In the Jewish Bible (Old Testament) we read of King Hezekiah who, while fully trusting God for protection, did everything he could to protect Jerusalem from its violent enemies including constructing water tunnels to insure a flow of spring water into the walled City of David (the tunnels exist to this day). Thus, I believe we too need to trust the Lord and prepare.

In the film Lord of the Rings, Gandalf the Great warns his friends as their death seems to be drawing near, exclaiming, “Fly you fools!”

Sad thing is, this is not a movie.