A Film You Must See: Harriet 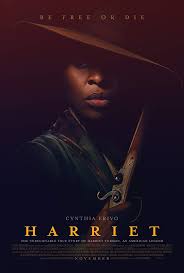 I HIGHLY recommend this film!

Harriet Tubman was born into this world in 1820, as a slave named Araminta (aka, “Minty”) in Dorchester county, Maryland. In 1849, knowing she was about to be sold and therefore separated from her family, she narrowly escaped from her “owners” and made it 100 miles to freedom in Pennsylvania.

Despite strong advice to the contrary, the following year she made her way back to Maryland to lead her sister and two children to freedom. She would eventually risk her own life 18 more times as she led scores of former slaves to freedom via the Underground Railroad, an elaborate secret network of safe houses organized for that purpose.

By her extraordinary courage, ingenuity, persistence, and iron discipline, Harriet became the railroad’s most famous “conductor,” as such people were referred to, and was widely known as the “Moses of her people.”

She never lost a fugitive slave that she was leading to freedom.

One dramatic moment of the film shows Harriet leading a battalion of over 150 black soldiers during the Civil War.  It’s all true.  In the depicted raid more than 750 enslaved people in South Carolina were liberated.

Harriet Tubman was one tough lady.

Here’s what I especially appreciate about the film: it doesn’t shy away from the good, the bad, and the ugly in an effort to be politically correct.

Obviously, the film shows us the stereotypical, ignorant, brutal, white slaveholders. But it also sheds a light on the many white people who risked their own lives (and their fortunes) to aid in the liberation of the blacks held in bondage.

Likewise, the film also exposes the fact that there were free blacks who were in cahoots with the slave owners and negotiated bounties to hunt down escaped slaves.

What the film misses: Harriet Tubman was an authentic follower of Jesus Christ and, as such, had a connection with God that enabled her to “hear” His voice (trust me—many real-deal Christians have had this experience). While the script does acknowledge Harriet receiving instructions from God, in the film those divine orders seem to come from “spells” that overcome her like hypnotic voodoo trances.  Yes, she did apparently have a mild form of epilepsy (from severe head trauma), but she also really did hear that magnificent, mysterious, still, strong voice of God.

I might add, many (most?) of the white people who aided the effort of the Underground Railroad were also devout Christians, and this isn’t specifically highlighted either.

Those few criticisms aside, this is a wonderfully produced film that everyone should see (not suitable for kids—best for mature teenagers and upward).

Kudos to director Kasi Lemmons, who wrote the screenplay with Gregory Allen Howard.