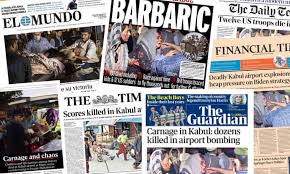 Among the greatest misconceptions of the two terms of Barack Obama was that he was “inept” and “ineffectual” in his office.

Obama hated America and once at the epicenter of power he was very focused on carrying out his plan which was, with the help of likeminded cohorts, to wreak as much destruction on the nation as he possibly could. Obama waged an insidious war on America from within. And his efforts were largely successful.

Then came the Donald Trump win in 2016. The plan was for Hillary to take the ball from Obama and run America further into the ground. Trump ruined those plans.

But ever since the Biden Cabal usurped the Executive Branch, our Nation has suffered a virtual rerun of those appalling Obama years. Many Americans are castigating Joe Biden for his lack of good judgment, his dementia, and his general “unfitness” for office. And while these all seem true, they entirely miss the point.

Behind the scenes, the Biden Cabal has been completely in control of implementing the plans of the Obama administration. Indeed, look at the people in the Biden Cabal who once worked with and for Obama.

Immediately upon Joe stumbling through the Oath of Office, and then up the steps to the Oval Office, the Biden Cabal began rescinding major successful policies initiated by President Trump. From the Keystone Pipeline, to the southern border wall, mainstays of President Trump’s tenure were targeted and revoked. Consistently, whether in border communities or at gas pumps across the land, Americans directly suffered as a consequence. The ugly parallels to the Obama years have been piling up ever since.

Now we witness the horrendous and demonically evil suffering and death of innocent Afghanis, Americans, and others caught in the Afghanistan nightmare during the past few weeks. This should surprise no one. Lurking within the bowels of the Biden Cabal is an anti-American, anti-Israel, pro-islam collaboration being rolled out for the world to see. This was all as predictable as the atrocities committed throughout the Middle East by all the other islamic terrorists who rampaged during the Obama years

The added outrage of billions of dollars in American military assets, now in the hands of the Taliban, makes absolutely no sense whatsoever until one considers how thoroughly Obama sold out the security of the entire region with his nuclear “deal” with Iran, whereby accepting the word of crazed islamist theocrats that they wouldn’t devote their recourses to building an atom bomb. Worse yet, in return for that empty promise, he handed over billions of dollars in hard currency to help them finance their “peaceful research.”

You can bet our military assets are being picked apart with fine toothed combs by Iran and China’s military experts.

But worse yet we have satan’s representatives on this earth, the Islamists, wreaking havoc on Christians and non-conforming muslims. A credible military source was on Charlie Kirk’s program describing the Afghan father who killed his two daughters out of mercy before they could be claimed as sex slaves by the Taliban.

The propagandists at Snopes will of course claim this to be false.

As direct direct consequence of Biden policies, America’s standing on the world scene has been trashed. Thousands of Christians and other Westerners in Afghanistan are facing hardship and death, which was totally preventable. And now thousands of military age young Afghani men, claiming to be “refugees,” are being dispersed throughout the non-muslim world, even including the United States.

Only a year ago, Arab nations were signing peace treaties with Israel. Stability, security and freedom were on the rise throughout that part of the globe, and such nightmarish entities as the Taliban were barely surviving in the shadows and caves. Our side should never let the leftist apologists try to dodge direct culpability for the tragedy and horror that is now unfolding. Nor should we hesitate to “connect the dots” as to who is ultimately responsible. Islamist monsters slaughtering Americans.

It’s Obama all over again, but this time on steroids.

As for me, the only weapon of retaliation I can wield is prayer. This Saturday I have men joining be from around the world on a Zoom call to cry out to the God of Creation, the upholder of all things, the one who sits at the right hand of the Father, the Messiah Jesus, for mercy.

I hope you too will take some time to pray as well.

Meantime, these reckless bastards of freedom must be voted out in 2024.