Biden’s Bungles: We The People Are Not Laughing

“Putin knows if I am president of the United States, his days of tyranny and trying to intimidate the United States and those in Eastern Europe are over,” Joe Biden boasted in a fundraising ad for his 2019 campaign for the presidency. 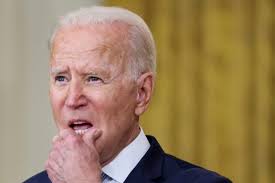 Joe made it to the White House, and Putin laughed all the way to Kyiv.

Meantime, We The People are not laughing. We have sent billions of dollars of freshly printed money, on loan from the Federal Reserve, to Ukraine. Much of this cash is unaccounted for; it was given with no strings attached.  The thugs who run Ukraine are laughing too.

And then there is our economy, which is terrible. We The People are not laughing. We see through this charade.

Like the Administration’s ridiculous response to COVID (mandates, masks, lockdowns, and loads of free cash to Millennials and Gen Z). Don’t forget the vaccine; I mean vaccines; I mean vaccines and booster; no, make that two boosters. “And let’s push them on children too!”

Then there’s throttling our fossil fuel spigot. Gas and diesel prices are hurting the average and below average American earner immensely, not to mention those on a fixed income. We The People are angered whenever we go to the pump.

And how about this: I was at the CVS recently and witnessed entire shelves in the non-prescription med aisle empty. Supply chains are backed-up beyond belief.  Inflation is off the charts.

All this within the first year of the Biden “Presidency!”

Oh, and I’m not even going to unpack the insane policies coming from the White House encouraging boys and girls to become girls and boys. Nor will I bring up this stupid notion that men can have babies. We The People are not stupid. We know what time it is.

If you want bullet points, how about these:

Think about this: not only has Biden proven he is incapable of standing up to Putin, instead he is building a pipeline for him. Russia is emboldened because of Biden’s failed leadership.

Biden and his administration have proven that they will not hold Communist China accountable for its lack of transparency and mishandling of the COVID-19 outbreak.

Islamic radicals worldwide fear nothing of Biden, and are foaming at the mouth.

Plus, Biden and his political allies are pushing the evil Woke Agenda while the devil cackles with glee.

We The People know these fools have nearly three more years to try “reset” this nation into something Marx would be proud of.

No, We The People are not laughing, and instead remain hopeful. The midterms cometh and 2024 is on the horizon.

Oh, and Donald Trump has totally upgraded his 757. Do you think he’d be spending that kind of money if he didn’t have plans to use that plane, a lot, in the next few years?