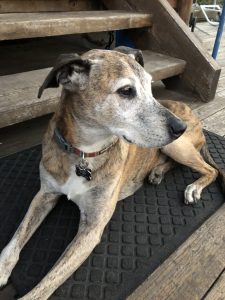 I’m brokenhearted. We put our dog, Lulu, to sleep today.

Lulu was a “Catahoula Leopard Dog” that my wife and boys selected from the San Francisco SPCA over 14 years ago.

Susie just sold her business and had promised our two younger boys, Ben and Josh, that once she sold the company our family could get a dog.

At the time I was hosting the KSFO Morning Show in San Francisco where each Friday we had a segment with the SPCA called “Puppy Love.” The folks from the SPCA would bring an adoptable  dog into the studio and introduce it to our audience. On this particular Friday it was a really cool looking pup with a leopard-like coat. I immediately called my wife and said, “Get to the SPCA right away, you will love this dog!”

Susie and the boys took off for the SPCA, but they were beat by another listener. However, there was different puppy from the same litter who became ours! The dog’s name was declared on the ride back home by Ben: “Lulu,” short for “Honolulu.”

Lulu quickly became the great guardian of our family and property.  She loved to tree racoons and even mix it up with skunks (successfully I might add). Eventually she actually broke her pelvis chasing three raccoons up a tree, and later blew out her left ACL running down the stairs in a chase for more.

Sadly she never fully recovered from those injuries. Nonetheless, Lulu remained a faithful friend to anyone who gave her loving attention.

During the past year she struggled a lot with the physical ailments and a variety of digestive issues.  She often groaned, and had occasional difficulty laying down and getting back up. That said, she continued to enjoy slow walks on the beach and getting hugs and pets from Susie and me. She also loved sunbathing on our deck while keeping a watchful eye on the beach below.

We decided to put her life to an end three separate times. I chickened out and called off the first two, and then finally we knew it was time. True confession: I actually prayed that the Lord would give me a sign that this was the right move.

I took Lulu to the beach for one final walk yesterday. I told her, “it will be the best day ever!”

I planned on letting her walk off-leash in an area near a lagoon where she always desired to sniff around. I was ready to be there with her as long as she wanted. Sadly, less than a half-hour into the walk Lulu’s left leg failed and she immediately collapsed to the ground. She was in such discomfort that she refused to even budge. I called Ben to come help carry her home. While waiting for Ben I laid on the sand and talked to Lulu, stroking her graying coat. More than anything I was inundated with a flood of wonderful memories involving my wife and kids. Lulu was with Sue and I for some  super monumental years.  About twenty minutes later, as Ben was arriving, Lulu determinedly, yet gingerly, stood up and pointed her nose towards home.

I keep thinking of that ride to the vet. Poor Lulu had no idea what was going to happen; however, placed in a similar role would any of us really want to know? Lulu followed our commands all the way into the patient room where she obediently rested on a mat on the floor. Susie and I took a knee and looked her in the eyes telling her what a great friend she was and how she had been the perfect dog for our family. We told her we knew she was in a lot of pain lately and we thanked her for always trying do her primary duty: take care of us.

We told Lulu she was going to sleep and it wouldn’t be painful at all.

Faithful Lulu.  She accepted everything we told her.

Through our tears we thanked God for giving us such a great dog. She was just what our family needed.

Soon the doctor entered, administered a sedative, and left. Lulu immediately became drowsy as we continued to pour out our love.

A few minutes later the doctor returned and asked if we were ready.

Susie looked into Lulu’s drowsy eyes and softly said. “We love you, Lulu. You’re a good doggie. You’re going to have a nice sleep.”

Gosh, I miss that dog and wish I could relive those last minutes with her.

We took her body back home and buried her in a nice spot overlooking the beach.

Curiously, The Bible does not give any explicit teaching on whether our beloved four-legged friends have “souls” or whether they will be in Heaven. And yes, I know the Bible is fairly clear on the fact that only humans are made “in the image of God.”

However, The Bible does state that both humans (Genesis 2:7) and animals (7:15,) possess the glorious “breath of life.” The Bible’s ancient book of Book of Psalms also states,  “A good person is concerned for the welfare of their animals…” (Proverbs 12:10).  So on this matter, I don’t know.  But I do know this: there will be a ton of wonderful surprises in Heaven.

That said, I can’t help but dream that Lulu’s having the best day ever.