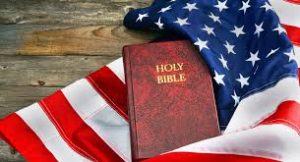 Have you heard the new phrase being used to degrade millions of Trump supporters?

Religious members of the left shrewdly coined this term in an attempt to smear faithful Christians who are politically conservative and voted for Donald J. Trump.

The phony moniker picked up steam following the grossly mis-reported mess that occurred at the U.S. Capitol on January 6th.

A coalition of left-leaning church leaders have launched a project named “Christians Against Christian Nationalism.” In their mission statement they cite “Christian nationalism” as a “persistent threat to both our religious communities and our democracy.”

Their move is simply another swipe from the cancel culture; it’s a bid to drive conservative Christians out of the public square.

Clearly, these sly activists (which includes well-known socialist Jim Wallis, a democrat operative) are seeking to redefine nationalism in a way that implies something sinister about conservative Christians who love their country and want to “Make America Great Again.”

Seriously, no politically conservative follower of Jesus I know is arguing that to be a solid American patriot, one must be a Christian.

Here’s the deal: a Christian (or ANYONE) who loves this nation, respects the Bill of Rights, is for tighter border security, wants our economy to soar, is not ashamed of public displays of Biblical morality, demands integrity from our elected representatives, and desires America to be the very best she can be, has nothing to apologize for.

A foundation of Biblical Christianity was intended by our founders. Supreme Court Justice David Brewer (1837-1910 ) explained it quite well:

[I]n what sense can [America] be called a Christian nation? Not in the sense that Christianity is the established religion or that the people are in any manner compelled to support it. On the contrary, the Constitution specifically provides that “Congress shall make no law respecting an establishment of religion, or prohibiting the free exercise thereof.” Neither is it Christian in the sense that all its citizens are either in fact or name Christians. On the contrary, all religions have free scope within our borders. Numbers of our people profess other religions, and many reject all. Nor is it Christian in the sense that a profession of Christianity is a condition of holding office or otherwise engaging in public service, or essential to recognition either politically or socially. In fact, the government as a legal organization is independent of all religions. Nevertheless, we constantly speak of this republic as a Christian nation – in fact, as the leading Christian nation of the world.

America has been referred to as a Christian nation because the Bible has so largely shaped and molded it.  As the second President of the United States, John Adams, said, “The general principle on which the fathers achieved independence were…the general principles of Christianity.”

Adams also declared that, “Our Constitution was made only for a moral and religious people.  It is wholly inadequate to the government of any other.”

A great, prosperous America has overflowed with blessings to the rest of the world. Those blessings have included necessities for living, rebuilding nations after wars and, most importantly, sharing the all-important news of the saving power of Jesus.

As the saying goes, a rising tide lifts all boats.

As politically conservative Christians we affirm God’s providential working in history. The material blessings of the United States are not unconnected from the Christian morality that has undergirded our country.  Christians should continue to exert their influence at all levels of government, while embracing a free marketplace of ideas that allows for open debate and religious freedom.

Being a conservative Christian patriot is nothing to be ashamed of. Let us continue to press on to Make America Great Again.