July 4th Special Edition Podcast: Signers of the Declaration Who Gave All 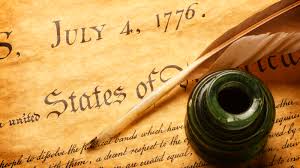 America’s Founders emphatically placed their honor and duty ahead of their private rights.

The Declaration of Independence says, in its second paragraph, that when a people is subjected to a long train of abuses aiming at absolute despotism, “it is their right, it is their duty,” to change the government. This duty is higher than one’s own personal survival or selfish interest. It may in fact require the sacrifice of one’s own life. That is why the Declaration concludes with these noble words: “We pledge to each other our lives, our fortunes, and our sacred honor.”

In the July 4th Special Edition of my podcast Hidden Headlines you will learn about three signers of the Declaration, and their wives, whose fortunes and lives were destroyed because of their decision to sign  this precious document.  Their’s was the ultimate act of maintaining “sacred honor.”

Honor and duty are superior to rights and self-interest. Those who consider The Founders’ to be a bunch of white supremacists should consider a statement of this conviction found in the “Declaration of the Causes and Necessity of Their Taking up Arms,” co-authored by Jefferson and John Dickinson, and approved by the Continental Congress in 1775:

“We have counted the cost of this contest, and find nothing so dreadful as voluntary slavery. Honor, justice, and humanity, forbid us tamely to surrender that freedom which we have received from our gallant ancestors. . . . We cannot endure the infamy and guilt of resigning succeeding generations to that wretchedness which inevitably awaits them, if we basely entail hereditary bondage upon them. . . . [We are] with one mind resolved to die freemen rather than to live slaves.”

If The Founders were really racists,  they would never have believed that slavery and dishonor are worse than death.