Despite What the Media Says, There’s NO Climate Catastrophe Coming in 2020 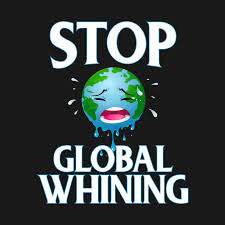 We now have an entire sector of the population – younger Millennials and Generation Z – who have been warned in cartoons, educated in their schools, coaxed on the Internet, and convinced by the mainstream media that human beings have caused global warming/climate change and that unless there is monumental government action the planet will cross a point of no return in twelve years.

Seriously, countless kids and young adults have been fed a load of junk science and misinformation and now live 24/7 with this unnecessary deep-seated fear that the end may be near.

No doubt this topic popped-up over the holiday season with that liberal relative.  So here are some talking points to consider as we roll into the new year. I’ll even do this without getting into a he-said-she-said, I’ve-got-my-facts-and-you-have-yours, type of argument.

Let me begin by telling you about three people, two of whom I spent memorable time with.

I’ll start with Joanne Simpson.  Joanne was the first woman in the United States to receive a Ph.D. in meteorology. She did this back in late 1940s and early 1950s, first by receiving undergraduate and graduate degrees at the University of Chicago, and then by complete post-doctoral work at Dartmouth College. I should probably mention she was also African American.  Simpson was a member of the National Academy of Engineering, taught and researched meteorology at numerous universities, and worked for the federal government. She passed in 2010.

Sadly, I never had the pleasure to meet Dr. Simpson, but we had many friends in common.

Another graduate of the University of Chicago was Dr. William Gray. “Bill,” as he liked to be called, is widely regarded at the pioneer of hurricane forecasting.  In fact, the headed of the Tropical Meteorology Project at Colorado State University.  For several decades, media types from all over the world awaited Dr. Gray’s annual hurricane forecast in which he, quite accurately, predicted how many hurricanes would form in the coming season. Bill was a frequent guest on my radio show.  He passed in 2016

Harrison “Jack” Schmitt has lived a colorful life. He has a doctorate in geology, has been a university professor, was a United States Senator (from New Mexico), and I should also mention once walked for 22-hours on the moon. I had the wonderful pleasure of dining with Jack, as he insists on being called.

You have to admit, these three individuals, all with Ph.D’s in science, were/are well accomplished in their fields.  Guess what else they have in common?  The educated conviction that human activity is NOT altering the global climate.

By the way, they’re not alone. I could mention scores of others including professors, former directors of the national hurricane center, rocket scientists, even the guy who invented the first weather satellite. All would say human-caused global warming/climate change is bunk! But the bulk of media would lead you to believe such people don’t exist, and if they do exist they are on-the-fringe kooks.

Next, let’s look at two current climate scare stories in the news.

One involves the jet stream, which I know a little bit about. It was my best subject when I was in meteorology school at San Jose State University. The jet stream (actually there are many such streams at any given time), is a river of air blowing hundreds of miles per hour at altitudes of 30,000 to 50,000 feet above the planet.  Simply put, these massive streams push storms around the globe.  A recent news story is that the jet stream is shrinking because of human-induced air pollution and thus storms will soon run out of their lanes and wreak havoc on the planet.

Problem is, the so-called scientists who are pushing this theory have NO convincing data to back it up.

Nonetheless, the media is running with it like it’s gospel.

My favorite professor in the San Jose State University Meteorology Department would have gotten a big kick out of this phony news report. He was colorful man named Dr. Sid Serebriny. “Dr. Sid” was credited as being one of the guys who formally discovered the jet stream during WW2. Dr. Sid is no longer with us, but when I was hanging out with him in the Eighties and Nineties, he was always amused by the thin arguments many tried to use to “prove” global warming was for real.

The other story in the news is that Venice is flooding. Again. Some are saying it’s the worst flooding there in more than 50 years.  Such high-water levels will leave “a permanent mark”, Venice Mayor Luigi Brugnaro tweeted. “Now the government must listen,” he added. “These are the effects of climate change… the costs will be high.”

Let’s ask a few basic questions. First, what was occurring 50-years-ago when Venice last experienced such flooding?  It was actually in 1966, and the concern back then was global cooling. Next let’s take a look at Venice. It’s a city made up of more than 100 islands inside a lagoon off the north-east coast of Italy. The main landmass is intersected by the Grand Canal.  It is also an ancient city that is experiencing widespread subsidence. In other words, it is SINKING.  A project to protect the city from flooding has been under way since 2003 but has been hit by soaring costs, scandals and delays.

In my opinion, the Mayor’s cry for help is really a desperate call for more funding, which will line the pockets of more scandalous actors.

Finally, one more story in the news that didn’t get as much play as the first two. A new study by researchers at Turku University in Finland concluded the global temperature has risen 0.1°C over the past century.  And how much of that rise can be attributed to humans?

That’s right, just 1/100th of a degree can be attributed to humankind.

The paper, titled ‘No experimental evidence for the significant anthropogenic climate change’ was published by Jyrki Kauppinen and Pekka Malmi. The researchers found that, “During the last hundred years the temperature is increased about 0.1°C because of carbon dioxide. The human contribution was about 0.01°C.”

A 0.01 degree Celsius increase in temperature would be inconceivable to humankind and would hardly produce enough mojo to alter the Earth’s climate.