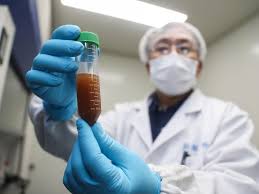 The “messenger RNA” technology, or mRNA, used by Pfizer and Moderna in their Covid-19 “vaccines” is a totally new and previously untested technology.  In theory, it works by hacking into the machinery of human cells and turning them into vaccine factories. Then, if the COVID-19 virus were to enter the body, the cells would be prepared to successfully fight the illness.

Again, that’s the theory: altering human beings at the cellular level.  It’s sounds like something dreamed up by Dr. Frankenstein.

Authentic vaccines work by training the body to recognize certain proteins, known as antigens, that are made by disease-causing viruses or bacteria, thus priming the immune system to mount a response. To accomplish this subjects are either injected with small amounts of the virus, or given weaker attenuated forms of the virus.

By contrast, the synthetic messenger RNA technology developed by Pfizer and Moderna uses an injection to carry RNA instructions into action, guiding cells on how to make what are known as spike proteins. This causes human cells to grow proteins that resemble the virus, which in turn elicits the production of antibodies that latch on to the real virus and stop it from doing harm.

The technology was first conceived in 1990, but it wasn’t until the mid-2000s that Drew Weissman, an immunologist at the University of Pennsylvania, and Katalin Kariko, now a senior vice president at Germany’s BioNTech, found a way to modify synthetic RNA to prevent it from triggering a dangerous inflammatory response that was killing lab mice.

COVID-19 was first noted in Wuhan, China in December of 2019. According to the New England Journal of Medicine,  seven months later, beginning in July 2020, some 30,000 humans allowed themselves to be subjected to experimental mRNA vaccines designed to stop the COVID-19 virus.  The trial continued through October. The shots began global delivery soon after. Thus, the pro-vaxxers are quick to proclaim the COVID vaccinations were privately tested on humans prior to public release.

In one year, from discovery of the virus, including a mere four months of testing, the shot was available to the world.

Compare that to the 1954 field trial of Jonas Salk’s inactivated poliovirus vaccine. This trial enrolled a huge number of subjects—1.3 million children in all—in what is the largest medical field trial ever conducted.

Given how quickly the mRNA shot came onto the scene it seems to me that a basic concern not being addressed is how the shots might impact the effectiveness of a recipient’s immunity system in the future?  An Internet search brought me to this September 2021 statement from the University of California-Davis Health Department:

Question: Do we know of any long-term effects from the COVID-19 vaccine?

Answer: We do not have long-term safety data of these COVID-19 vaccines since they have only been studied in humans for about 6 months.

It won’t be long before this page is expunged.

We do not have long-term safety data of these COVID-19 vaccines since they have only been studied in humans for about 6 months.

This means the vaccinated are the guinea pigs.

What if your long-term immune system function is harmed by this synthetic, unnatural, messenger RNA technology which was only tested on humans for half-a-year?

And then there are those who are immune-compromised. As we’ve learned from patients with AIDS, those individuals suffering from heavily suppressed immune function can be killed by simple low-level winter colds or flu pathogens that would normally pose no risk at all to a healthy person.

In a very enlightening article from a PBS-TV affiliate we gain more insight on the inefficiency of the mRNA jabs (bold letters mine:

Some cancer patients lose immune cells known as B cells that make antibodies. Prescription drugs that treat some autoimmune diseases, like multiple sclerosis and some rheumatological diseases, also eliminate B cells. So these patients may not make antibodies from the vaccine.

At the very least,  these shots provide a false sense of security, especially for the immune-compromised.  On the other hand if these injections are actually compromising immune systems we may be in for a future tsunami of disease and illness.

Of course, such casualties would go down in the books as anything but vaccine related.  And for those who very few who actually die from COVID-19, or even a common cold that festers into pnemonia, they will no doubt go on record as having been infected with COVID variants which, of course, will be blamed on the selfish spreaders–the unvaccinated.

Meantime, immune system function can naturally enhanced by way of nutrition. For example, immune function is supported and enhanced by vitamins D and C, zinc, and other critical nutrients (not to mention Ivermectin if you do become ill).  In addition, thoroughly washing your hands regularly throughout the day and keeping your hands off your face are also time-tested health enhancers.