Menu for the First Thanksgiving Meal, 1621 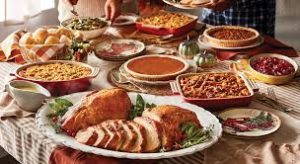 The traditional Thanksgiving meal has roots that extend back to November 1621, when the newly arrived Pilgrims and the Wampanoag Indians gathered at Plymouth (now in Massachusetts in New England)  for a three-day autumn harvest celebration. This event is regarded as America’s “first Thanksgiving.”

But what was really on the menu at the famous banquet, and which of today’s time-honored favorites didn’t earn a place at the table until later in the holiday’s 400-year history?

In the book, On Plymouth Plantation, written by Mayflower traveler and the colony’s first Governor, William Bradford, we find remarks regarding the first full year’s harvest that autumn in 1621: “there was great store of wild turkeys, of which they took many, besides venison, etc.”

The menu would not be possible were it not for  the bounty  reaped with the help of their Native American neighbors. Local vegetables that likely appeared on the table included onions, beans, lettuce, spinach, cabbage, carrots and perhaps peas. Corn, which records show was plentiful at the first harvest, might also have been served, but not in the way most people enjoy it now. In those days, the corn would have been removed from the cob and turned into cornmeal, which was then boiled and pounded into a thick corn mush or porridge that was occasionally sweetened with molasses. However, the Indians did provide the settlers with a special treat that would become an American favorite forever: popcorn!

Fruits indigenous to the region included blueberries, plums, grapes, gooseberries, raspberries and, of course cranberries, which Native Americans ate and used as a natural dye. The Pilgrims might have been familiar with cranberries by the first Thanksgiving, but they wouldn’t have made sauces and relishes with the tart orbs. That’s because the sacks of sugar that traveled across the Atlantic on the Mayflower were nearly or fully depleted by November 1621. Cooks didn’t begin boiling cranberries with sugar and using the mixture as an accompaniment for meats until about 50 years later.

There may also have been seafood on the menu. Original colonist Edward Winslow wrote, “Our bay is full of lobsters all the summer and affordeth variety of other fish; in September we can take a hogshead of eels in a night with small labor, and can dig them out of their beds all the winter. We have mussels… at our doors. Oysters we have none near, but we can have them brought by the Indians when we will.”

And then there’s the pumpkin pie.

Both the Pilgrims and  the Wampanoag tribe ate pumpkins  other squashes indigenous to New England, possibly even during the first harvest festival. But the fledgling colony lacked the butter and wheat flour necessary for making pie crust. Moreover, settlers had yet to construct an oven for baking. According to some accounts, early English settlers in North America improvised by hollowing out pumpkins, filling the shells with milk, honey and spices to make a custard, then roasting the gourds whole in hot ashes.

Whatever is on your menu, be it large, small, with or without the turkey, and perhaps void of pumpkin pie (I prefer pecan)…

HAVE A WONDERFUL DAY OF FELLOWSHIP, FOOD, AND FAITH.