Hit Me Twice: YouTube’s Thought Police are at it again 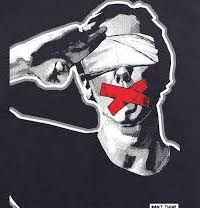 Both books are filled with hundreds of footnotes detailing peer-reviewed scientific studies illustrating why one should, at the least, be skeptical of human-caused global warming claims.

Interestingly, “Climategate” and “Eco-Tyranny” also clearly tie the roots of the green movement to a host of influential leftists, beginning with Marx and Lenin.

Last week I posted a tongue-in-cheek video on YouTube, for an ongoing series called, “The Epic Story of the Day.” In this particular video, subtitled, “Global Warming,” I read a vivid description of incredibly warm conditions in the Arctic Circle and a prediction of worse to come. I concluded my comments by comically mentioning that the article I was reading was originally published, word-for-word, by the Washington Post – in 1922!

Within an hour of posting the humorous piece, YouTube’s speech police stationed this dictatorial warning directly below the video box:

“Global warming is a long-term rise in the average temperature of the Earth’s climate system, an aspect of climate change shown by temperature measurements and by multiple effects of the warming.”

The disclaimer, which is primarily seen by those using a desktop computer, included a link to Wikipedia declaring anthropogenic global warming to be fact.

Unreal. To think that YouTube’s almighty speech police rely on Wikipedia as its purveyor of truth.

What a joke. Last I checked, the bio Wikipedia displays about me is brimming with blunders.

This is chilling. YouTube (a subsidiary of Google) is likely the largest media content provider in the world. By all accounts, its board of directors and corporate officers lean (way) left. At what point will a decision be made to add disclaimers to videos involving the Ten Commandments, the deity of Jesus, or biblically based morality and family values?

No question, YouTube is in the censorship business. As a private enterprise they are able to get away with it because they are not subject to a government entity like, for example, the Federal Communications Commission, which oversees broadcast radio and television.

The plaintiff, Prager University, said YouTube’s “animus” toward its “political identity and viewpoint” led it to curb access to videos, including through its “Restricted Mode” setting, on such topics as abortion, gun rights, Islam and terrorism, despite its stated promise of neutrality.

The judge said YouTube did not qualify as state actor subject to the First Amendment by creating a “public forum” for speech.

“Defendants are private entities who created their own video-sharing social media website and make decisions about whether and how to regulate content that has been uploaded on that website,” Koh wrote. “Plaintiff has not shown that defendants have engaged in one of the very few public functions that were traditionally exclusively reserved to the state,” she added.

My recommendation? When posting conservative truth, thought and opinion on YouTube, follow the words of Jesus: “I am sending you out like sheep among wolves. Therefore, be as shrewd as snakes and as innocent as doves” (Matthew 10:16).