My Commentary at World Net Daily: The greenies’ circular firing squad is expanding 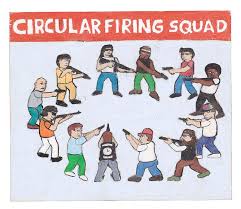 This article (by Yours Truly) was published today at World Net Daily:

“Intersectional” was coined from thin air in 1989 by a key player in the critical race theory domain, Kimberle Crenshaw. Her contention was that the feminist movement was too white, too middle-class and too heterosexual. Crenshaw believed the movement needed to become “intersectional” and therefore address the needs of women who come from different races, ethnicities, sexualities, classes, abilities, etc.

Now the term is being paired with environmentalism. This has all occurred very recently, in fact just last year. Critical race theorists contend that environmentalism must shift from focusing on the needs of white, middle-class heterosexuals to every imaginable minority and, in the process, be used as an effective tool to forcefully demand equity for these various groups.

A rock star in this growing movement is Leah Thomas, a climate activist and popular social media “influencer.” She launched the phrase intersectional environmentalism at the height of the Black Lives Matter campaign following the death of George Floyd. She defined the moniker on Instagram:

“Intersectional Environmentalism is an inclusive version of environmentalism that advocates for both the protection of people and the planet. It identifies the ways in which injustices happening to marginalized communities and the earth are interconnected. It brings injustices done to the most vulnerable communities, and the earth, to the forefront and does not minimize or silence social inequality. Intersectional environmentalism advocates for justice for people and the planet.”

If Donald Trump were in the White House today this new version of environmentalism would be patiently baking in the left’s doctrinal oven, but now that Jolly Green Joe sits in the Oval Office it’s out of the oven and onto a serving plate, complete with frosting procured by the taxpayer. In fact, an Earth Day headline from Detroit Today said it all: “Biden’s New Environmental Justice Advisory Council Prioritizes Intersectional Approach to Climate Issues.”

However, there’s one snafu the left has to work out as they roll out this plan. The advocates of intersectionalism are essentially snacking on one other.

This new green wing is placing wealthy white environmentalists in their cross-hairs. Despite the fact that many such people have been funding the enviro movement for decades, they are now being called out for living in pristine suburbs while turning a blind eye to the industrial milieu associated with poorer neighborhoods.

According to another popular social media influencer, Anna Piechel, who contributes to Platform Women, “[T]he ones who get all the attention for their advocacy are often white and wealthy.”

This new crusade has even gone so far to attack white vegans. In a piece posted at a Native American website, Lokata Law, Rylee McCallin writes:

These “militant vegans” make a point of incriminating any behavior related to or in alignment with the consumption of animal products in the interest of saving the planet and respecting the animals. What this popular trope also tends to do is disrespect historical and cultural traditions related to the consumption and use of animal products among communities of color.

This circular firing squad within the ranks of the greenies is actually entertaining to behold.

Here’s the real deal: The science is on our side. There is no human-caused climate emergency, and the environmental challenges we do face (litter, clean water, regional air pollution) are generally effectively addressed at local and state levels without massive federal spending and burdensome regulations.

Nonetheless, this burgeoning intersectional doctrine now has the White House, much of Congress and a host of well-funded radicals demanding equity in the form of redistribution of wealth, elimination of all property rights and universal basic income.

That said, I believe the eyes of America are being opened to the truth, and the spirit of Life, Liberty and the pursuit of Happiness will prevail.