Liberals and Election Fraud, When They Lose 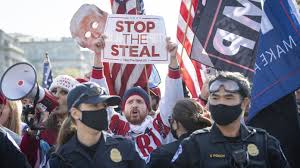 Liberals and Election Fraud, When They Lose

Liberals are so predictable. When we conservatives bring up the subjects of election integrity or election fraud, like well-programmed robots those on left immediately spout, “Denier,” or, “Conspiracy theorist!”

However, in the not so distant past, when democrats have made similar complaints about election results it is a completely different story that they, and their cozy friends in the media, insist must be taken as fact.

Here are a few poignant examples.

To this day democrats refuse to accept the results of the 2000 presidential election, when democrat Al Gore lost to republican George W. Bush. As you recall, the state of Florida’s electoral votes would eventually declare Bush the victor of that tight election, which ended up being decided by a very strictly regulated hand count. The decision was even upheld by the Supreme Court.

Al Gore never got over it.

In 2002, he finally did a post-election interview; it was with the Washington Post, which began its article by saying,

In his first interview since conceding the presidency to George W. Bush almost two years ago, former vice president Al Gore calls the outcome of the 2000 election “a crushing disappointment” and criticizes the 5-4 Supreme Court decision that put Bush in the White House as “completely inconsistent” with the court’s conservative philosophy.

“I believe that if everyone in Florida who tried to vote had had his or her vote counted properly, that I would have won,” Gore said.

In that same article, Gore’s wife, Tipper, also said, “I believe we won.”

Over a decade and a half later, in 2016, while campaigning for Hillary who was running for president against Donald Trump, Gore brought up the 2000 election during a rally. The crowd burst into a “Gore won, Gore won,” chant. Al basked in the glow of the moment.

The election in 2004 was no different than 2000 (John Kerry trying to unseat Bush), with Democrats once again vehemently denying the results of an outcome they did not agree with. In fact, then-Senator Barbara Boxer (D-CA) and then-Representative Stephanie Tubbs (D-OH) filed an objection to the certification of Ohio’s electoral college votes. Thirty-one House democrats flatly rejected the electoral votes from the state of Ohio, authoring a report of “numerous and serious election irregularities.”

John Kerry hit the talk show circuit in 2005 touting a report authored by House democrats, claiming people were “denied their right to vote; too many who tried to vote were intimidated.”

Fast forward to May 2019, when Clinton said, at an event in Inglewood, California, that the 2016 election was “stolen” from her.

In September 2019, in an interview on C-SPAN, Clinton dismissed Trump as an “illegitimate president,” saying “he knows” he “stole” the election from her.

In October 2020, Clinton continued to claim, in a Grabien podcast, that the 2016 presidential election was not conducted legitimately. “We still don’t really know what happened,” she screeched.

Meantime, the Bible puts all of this into tremendous perspective:

A false balance is an abomination to the Lord,
But a just weight is His delight.
When pride comes, then comes dishonor,
But with the humble is wisdom.
The integrity of the upright will guide them,
But the crookedness of the treacherous will destroy them.
Riches do not profit in the day of wrath,
But righteousness delivers from death.
The righteousness of the blameless will smooth his way,
But the wicked will fall by his own wickedness.
Proverbs 11:1-5.