Jesus the Messiah? An Enlightening, Compelling, Easy to Understand Argument for Every Jew and Gentile 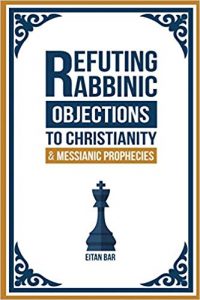 “Jesus was a magician!”

That was the strong rebuke I received from my dad when I tried to explain to him I believed Jesus is the Messiah. My dad (God rest his soul) was Jewish and had been told years ago that Jesus was not the promised Messiah but instead was a phony, a sorcerer, a magician.

Where did my dad get that thinking from?

From a host of ancient Sages (rabbis).

In a powerfully convincing book, Refuting Rabbinical Objections to Christianity and Messianic Prophecies, Eitan Barr, an Israeli Jew who believes Jesus (Yeshua) is the Messiah, explains that after Jesus’ death and resurrection, unbelieving rabbinical scholars began to purposely confuse their students and the general population with propaganda designed to instill fear upon anyone who considered Yeshua to be God’s promised redeemer.

While the rabbis continue to belittle Yeshua as a fake, or a magician, Barr examines the Messianic Biblical prophecies that contend the Messiah must be a descendant of David (1 Chronicle 17), be born in Bethlehem (Micah 5), appear before the destruction of the second Temple and executed in 32CE (Daniel 9), be born of a virgin (Isaiah 7), enter Jerusalem on a donkey (Zechariah 9), heal otherwise incurable conditions (Isaiah 35), be rejected by the leaders of his own people (Isaiah 53, Psalm 22), be a blessing to the Gentiles (Psalm 118), and be crucified (Pslam 22, Isaiah 53, Zechariah 12), and be raised from the dead…!

This scholarly book is an easy read and very enlightening.

This book is a must for:
– All Jewish people who are genuinely searching for the truth.
– For all Messianic Jews who desire to deepen their spiritual roots.
– For Gentile Christians who want to affirm the foundation of their salvation and be able to better share their faith with a Jewish friend.

By the way, my dad acknowledged Yeshua as his Savior about an hour before his departure into eternity.