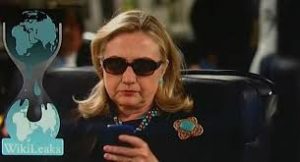 Even if the Russians did provide the jaw-dropping Podesta emails to Julian Assange, he was right to publish them on his website, Wikileaks.

I would have; and so should anyone calling themselves  a “journalist.”

Those emails exposed the treacherous practices of the Clinton political machine.

Here’s what the emails revealed:

The Clinton Foundation received millions of dollars from Saudi Arabia and Qatar, two of the major funders of radical jihadists, including ISIS.  For their donations, as secretary of state, Hillary Clinton paid them back by approving $80 billion in weapons sales to Saudi Arabia, enabling the Saudis to carry out a devastating war in Yemen.  In my mind there is blood on Hillary’s hands: that war eventually triggered a humanitarian crisis and left nearly 60,000 dead.

Hillary Clinton was paid $675,000 for speaking at Goldman Sachs.  In her lucrative talks, Clinton told the financial elites that she wanted “open trade and open borders.”  She also refused to criticize Wall Street about their direct involvement in the 2008 financial meltdown. One has to wonder what the Wall Street execs desired from Hillary in return for her lucrative speaking fee?

The Clinton campaign worked to influence the Republican primaries to ensure that Donald Trump was the Republican nominee. The Clinton’s were convinced Trump would be an easier foe to defeat than some of the other candidates.

1,700 of the 33,000 emails came directly from Hillary Clinton.  Hillary claimed the emails were about “wedding plans” and “yoga classes” and other vanilla personal issues.  Instead, we learned that Hillary was the primary architect of the war in Libya. As Secretary of State, Hillary believed that the overthrow of Libya’s Moammar Gadhafi would establish her credentials as the future president.  Instead, the war she sought has left Libya in chaos and has resulted in 40,000 dead.

And how do the Democrats respond to these facts? By calling anyone who believes they are true to be “a conspiracy theorist.”