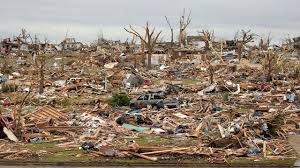 Observing the immense devastation from this past weekend’s tornado outbreak jars the soul.

However, don’t blame it on climate change.

The quintet of brutal tornadoes that left a 250-mile path of demolition, beginning Friday evening into early Saturday, was part of a storm system that created widespread damage and deaths in Arkansas, Tennessee, Illinois, Missouri and Kentucky, which was hit the hardest.

Within that storm complex the largest of the tornadoes has been categorized as an “EF3,” meaning its winds could have been ripping through at 165 mph. However, the ongoing forensic storm analysis could find that level raised to EF5, which would mean the winds were screaming at over well over 200 mph.

The last EF5 in Kentucky was during an April 3, 1974 storm, devastating the town of Brandenburg.

At a press event Saturday, President Biden was asked if he concludes, “these storms and the intensity has to do with climate changes?”

“Well,” the President replied, “all I know is that the intensity of the weather across the board has some impact as a consequence of the warming of the planet and the climate change. The specific impact on these specific storms, I can’t say at this point.”

Biden continued, “I’m going to be asking the EPA and others to take a look at that.  But the fact is that we all know everything is more intense when the climate is warming — everything.  And, obviously, it has some impact here, but I can’t give you a — a quantitative read on that.”

No, Mr. President. No, Ms. Media. These storms had nothing to do with climate change or global warming.

They had everything to do with a mass of unusually cold, dry air coming down from Canada, meeting a mass of warm, moist air from the Gulf of Mexico. Such an atmospheric collision is a recipe for dangerous tornadoes, even in December.

December tornadoes are not a freak occurrence. On average, about two dozen tornadoes form each December, and they’ve been known to be quite violent. Just two years ago, 40 tornadoes tore across the South on December 16 and 17, killing three people.

However, with over 100 people feared to have been killed, this past weekend’s outbreak was the deadliest on record.

Timing could have been an issue. These monsters occurred after dark. Statistically when tornadoes befall at night they are most fatal, perhaps because residents are not able to see the twister coming ahead of time and take appropriate shelter.

In an average year some 1,200 tornadoes occur in the U.S.  If anything, more are reported nowadays because of the abundance of well-equipped storm chasers who are more easily able to detect such storms. Death and destruction tolls are likely higher because of increased populations and high density communities.

Prior to this storm, Kentucky’s worst tornado occurred on March 27, 1890, ravaging the Louisville area.  Estimated to have been an EF4, the twister caused damage totalling $2.5 million in 1890 dollars, or approximately $7.6 billion today.

Media coverage has also become a reliable spout of climate change propaganda as the editors know so well which facts to conveniently leave out.

Meantime, non-profit climate orgs harness the scare of climate change and global warming to increase funding, while big government, elitists and one-worlders use the eco-scares it to further wealth redistribution and the transformation of the global economy into something Marx and Lenin would be so proud of.

Nevertheless, and far more importantly, our prayers go out for all those who are suffering because of this awful weather event.

Brian Sussman is the author of Climategate: A Veteran Meteorologist Exposes the Global Warming Scam, and Eco-Tyranny: How the Left’s Green Agenda will Dismantle America