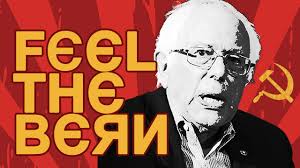 Make that claim about the Senator from Vermont and you’re met with many supporters who immediately proclaim, NO, he’s a socialist. Others counter that he’s a “democratic socialist.” But here’s what one well known organization says about their choice for president, Bernie Sanders:

“Of all the forces facing down Trump, only one can truly be characterized as ‘popular.’ The presidential campaign of Bernie Sanders is not just that of a progressive personality but the backbone of a broad and transformative popular movement led by the working class…. To this end, the Party should not just campaign for Sanders but must fully immerse itself within the progressive and anti-establishment movement for which Sanders is the spokesman.”

That comment was made by the Communist Party USA.

Bernie is a communist, and I prove it, in this edition of Hidden Headlines.

Listen on this website, or wherever you get your podcasts from!