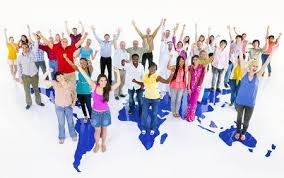 In an upcoming edition of my podcast, Hidden Headlines, I’m going to address a topic that I know my critics will take out of context: multiculturalism.

While I love aspects of all cultures, (i.e. food, dress, language, customs, traditions, etc.), I am also aware that historically every society that has tried to go forward in a multicultural fashion has failed, eventually winding up in the dusty annuls of history.

For a society to succeed, its citizens must be able to unite around common core values. The most fundamental values are national identity based on kept borders, a shared language, and a common culture, as well as desire to live in harmony with one’s countrymen.  Clinging to a national identity means more than differences of religion, color, or country of origin.

National identity develops community and the feeling of unity, and increases overall moral, respect for the law and the nation’s authorities.

The sense of community is crucial to the foundation of the mutual trust, helpfulness, openness, understanding and respect among the population. When people are deeply divided on core values they simply sense less fellowship with one another.

I think of my family. My dad’s parents immigrated to this country from eastern Europe in the early 1900s. My grandparents were textbook Ashkenazi Jews and only spoke Yiddish. However, they quickly learned English, embraced the American culture, participated in the economy and, upon having children, made sure that they were 100 percent red, white, and blue.

My mom’s grandparents had a very similar story.

And, while both mom and dad were proud of their heritage, they loved the United States first and foremost; as such, they identified as Americans.  This is why many used to refer to the USA as a “melting pot.”

I’m all for the melting pot.  For me, it doesn’t matter where your family is from, what is your first language,  what is the color of your skin, or your preference food; if you love this country first and pledge your allegiance to this wonderful republic, you are good in my book.

Conversely, when people identify with a culture whose values are not rooted in the nation’s culture problems ensue, and those problems become exacerbated when gatekeepers begin to coddle the minority culture. Quotas, hiring mandates, and government giveaways aimed at the cultural minority occur. Differences are not just highlighted but celebrated. Angst from within the indigenous culture festers.

Fortunately, for most of our history a majority of immigrants from almost all over the world have been able to accept and identify with our basic Western values.  However, as our borders erode, as foreign tongues are encouraged, and as alien cultures are embraced, the melting pot is progressively dissolving.