New Podcast – The Impeachment Trial of President Trump: What Would the Founders’ Say? 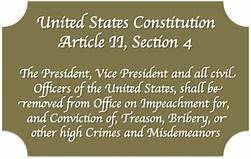 Liberals are watching intently, sure that Trump is guilty of treason, bribery, high crimes, and or misdemeanors. Conservatives contend this impeachment proceeding is nothing more than a democrat-led show trial aimed at attempting to keep Donald Trump from a second term.

What would America’s Founders say?  Better yet, what did they say regarding impeachment?

The current episode of Hidden Headlines (#52) will equip you to take a stand for truth as I dig far beneath the mainstream media’s wild headlines.

Among other facts, you will discover that as the Constitutional Convention in Philadelphia was winding down (1787) and the draft of the United States’ supreme law was almost finished, George Mason, the author of Virginia’s Declaration of Rights, was alarmed.  Over the course of the convention, the 61-year-old had come to fear the powerful new government his colleagues were creating.  Mason thought the president could become a tyrant as oppressive as George III.

So, on September 8, 1787, he rose to ask his fellow delegates a question: Why were treason and bribery the only grounds in the draft Constitution for impeaching the president?

After a sharp back-and-forth with 36-year old fellow Virginian James Madison, Mason came up with another category of impeachable offenses: “other high crimes and misdemeanors.” But what does that even mean? To Nancy Pelosi, Adam Schiff and Chuck Schumer, it could mean almost anything.  However, the Founders left us with some tremendous guidance regarding its authentic interpretation and, as such, the Democrats would appear to be way off the original high mark set by the Founders.

Check out Episode 52 of Hidden Headlines.