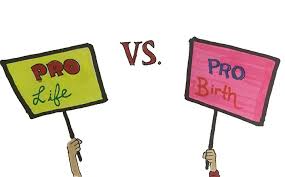 “If you are really pro-life you must be ready to care for those spared from abortion from ‘the womb to the tomb.’ Otherwise, you’re pro-birth, not pro-life.”

What an ignorant statement. Yet this is the new talking point from liberal Christians regarding America, post Roe v. Wade.

The abortion rate in America is high because of sin and self. The vast majority of women getting an abortion are not married;  most of those are likely women are living at or near poverty levels and are receiving streams of welfare benefits.  Those who are married and seek an abortion usually do so because of selfish ambition (timing or finances).

Let me stop right there and say this: Jesus is able to totally forgive a woman for her abortion. I have plenty of friends who had abortions and have since repented of their decision. In the eyes of God, it’s over and done with.

So let’s say a woman decides against abortion and chooses adoption instead. When adoption is employed in such cases of pregnancy, the child is virtually guaranteed a life outside of poverty and welfare. In other words, adoption breaks the chain of poverty because the adopting parents are qualified to adopt, in-part, because of a decent financial situation.  However, the liberal Christian contends that if the mother decides to keep her baby then we as a society must roll up our sleeves and be ready to aid in the heavy lifting of raising that child to adulthood and ensuring their success.

This is not compassion, it’s communism. And it will certainly not break the chains of poverty, but only exacerbate them. In fact, I contend the leftist politicians prefer this plan as it safeguards a reliable voting block. In fact, destination abortion states are basically going to further this cycle.

If churches were to get involved in this effort, I would say the best thing you could do is provide mentors and discipleship teams to grow these individuals up into solid men and women of God who are following their God-given calling. Many, many churches already do this. Certainly, I’ve seen some fruit in this over the years with young men I’ve spent time with. However, my mission is not to aid and abet those in poverty with handouts. I hope you agree.

By the way, on a side note, I know it’s nearly impossible for liberal Christians to believe this, but people really do climb out of poverty all this time. Most do it by getting married, sharing the expenses of a household, shunning welfare, working hard, getting good advice, and playing by the rules. Even people in minority groups progress to the next rung. Happens all the time.

In fact, I personally contend (again, personally) it’s easier to get out of poverty and into the middle class than it is to advance from the middle class to the upper (immense wealth that can be passed from one generation to the next). Those who make that big leap must: have a skill or talent that has proven to be a great source of income, work round the clock, manage their money extremely well, take risks, and rebound from the valleys they encounter along the way. Yes, there are some lucky folks who life’s lottery (sports stars and Silicon Valley stock options included), but even these lottery winners have to manage their finances well to be certifiable upper crust. Liberals would say the deck is stacked against minorities in making this leap, but I would counter by saying most (99 percent?) white people who try make the leap fall short.

As for me and my house: I’ve done what I can do: I co-founded an adoption advocacy group back-in-the-day (Brian’s Kids) that aided in over 400 children getting out of foster care and into adoptive families. The poverty cycle was broken for those kids (now adults). My wife and I also adopted three kids. They are all doing fine (and vote conservative too, I might add). One even decided to break the chain for a young woman who gave birth after years filled with drugs and homelessness. Now my little granddaughter has a chance to advance without government welfare and in an environment filled with the love of Jesus.

Pro-life. All the more possible without Roe.