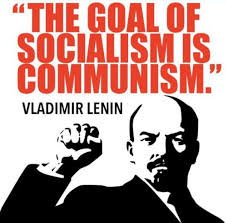 This commentary  was first published at World Net Daily…

“Society cannot leap into Communism from capitalism without going through a socialist stage of development.”

This predictive comment was spoken by Nikita Khrushchev, dictatorial leader of the Soviet Union. It was published by TIME Magazine in 1959 (February 9, Russia: Victor’s War).

In ’59 America’s leftists were fawning over an anticipated visit to the United States by Khrushchev.

Once here, his propaganda tour included a speech to the National Press Club in Washington on September 16, where wanted to clear the air on a previous statement that received much attention in the States: “We will bury capitalism.”

“I have already said that the words ‘We will bury capitalism’ should not be taken literally, as is done by ordinary gravediggers who carry a spade and dig graves and bury the dead,” he explained. “What I had in mind was the outlook for the development of human society. Socialism will inevitably succeed capitalism.”

Khrushchev ruled the communist Soviet Union, which included Russia and most of Eastern Europe, from 1953 to 1964. He did so with an iron fist. Political dissidents and all who practiced religion were brutally persecuted.

It’s a shame that nearly all Americans under 40 (Millennials and Gen Z) have never heard of Khrushchev. In fact, this demographic generally does not know anything about the Soviet Union which brutally reigned from 1922 until 1991, holding nearly 300 million people in its clutches. You see, America’s school curricula have been modified to keep such facts entombed in order to uphold a slogan from communism’s founder, Karl Marx, who proclaimed, “History means nothing.”

Now students come away believing socialism is not really such a bad idea. Yet it was the first Soviet leader, Vladimir Lenin, a disciple of Marx, who stated, “The goal of socialism is communism.”

The socialism stages of development are well underway in the U.S.A.

Look first at our public education system which has trained millions what to think, not how to think. Orthodox history has been deviously eliminated and replaced with Critical Race Theory, which has led us to violent racial strife and class enmity. Traditional human sexuality and biology have been usurped by an LGBTQ agenda. Free-market economics has been tossed in favor of government regulated pricing, distribution and production. Christianity, once a hallmark of public education, is now banned and replaced by faith in progressive government leaders.

Simultaneously, unimaginable levels of drug and alcohol abuse have created vast villages of tents and cardboard huts, not unlike the Third World. The economy in this growing freakish sector is fueled by unprosecuted crimes and government welfare cash.

Criticism of the above is countered by well-orchestrated controls over the flow of information. Editorial positions of popular news media tilt far left. Younger Americans rely on social media for their news with Gen Z preferring ridiculous sources like Instagram and TikTok, the latter headquartered in Beijing. Interestingly, Communist China only allows an extremely modified version of the app for its citizens.

And then there is the vote. Khrushchev’s predecessor was Joseph Stalin, a brutal dictator. In a memoir written by his secretary, Boris Bazhanov, Stalin is quoted as saying, “People who cast the votes decide nothing. The people who count the votes decide everything.”

Our Republic has been usurped by tyrants who are rewriting national history, purging it of inconvenient truths. Such players capitalize on the widespread frustration and profit from the chaos, seeking to curtail the people’s participation in politics. They discriminate based on race, sex, religion, and more recently masks and vaccinations. They hold no moral compass.

Now, more than ever, we need history to be told, the truth to be shared, and God to be revered.

By the way, I’ve recorded a podcast based on this article; it’s The Brian Sussman Show Podcast Episode #144, “Creeping Communism in the USA.”