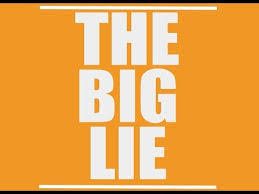 What you’re about to hear in this edition of Hidden Headlines is mind-blowing.

Today Joe Biden said, “We must protect the vaccinated from the unvaccinated.”

This is the Big Lie of our day.

Not only is Big-Pharma raking in billions on the “vaccine”, but the collusion within the vaccine acceptance program is carefully being hid by the mainstream media in order for the Big Lie to be played out before our very eyes.

As for the Big Lie, there was an atrocious whopper proclaimed in the last century, spoken by the chief propagandist of Hitler’s Nazi Party, Joesph Goebbels:

“If you tell a lie big enough and keep repeating it, people will eventually come to believe it. The lie can be maintained only for such time as the State can shield the people from the political, economic and/or military consequences of the lie. It thus becomes vitally important for the State to use all of its powers to repress dissent, for the truth is the mortal enemy of the lie, and thus by extension, the truth is the greatest enemy of the State.”

Remember, fear and worry are personalities of satan himself . However, 365 times in the Bible we are told to NOT FEAR.  Perhaps this one verse from the New Testament sums it up best:

You can listen here, or anywhere you enjoy your podcasts.
Posted in Category: Commentary, News, Politics, Tagged: