The Democrat Party’s Goal is Socialism, which leads to Communism 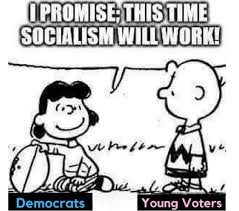 Today’s Democratic Party is more radical than any in the history of the United States of America. Democrats are beyond angry; they are out for total revenge.  And this isn’t about getting even for the Democrats. What they desire is akin to political murder. They want to utterly destroy the Republican Party and stuff a filthy red sock in the mouth of conservatives and right of center independents.

The Democrats sneer at the precepts we right-minded patriots hold dear: life, liberty, and the pursuit of happiness. Especially high on their list of contempt are Christians and Bible believing Jews who will embrace to the very end the traditional family, the exclusivity of male and female gender, and an uncompromising stand against abortion.

And don’t be fooled for a moment, despite the jabber before the cameras there is no intention of national reconciliation from the Democrats. The fact that Biden is not willing to publicly commit himself against radical ideas should worry every American. These scoundrels are pushing to remake our entire system politically, economically and socially.  They’ll do it by changing the rules to take over political power.  Initially, unbridled socialism is their goal.

And, “The goal of socialism is communism.”

I didn’t say that, Vladimir Lenin, an academic disciple of Karl Marx did.  Lenin was the first dictator of communist Soviet Russia.

And communism always leads to widespread imprisonment and execution.

I didn’t make that up. The history of the last century makes that horrid fact plain–well over 100-million anti-communists were slaughtered in communist countries.

But then again, “History means nothing.”

I didn’t say that either. Karl Marx did.