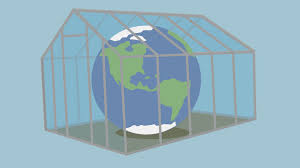 Record heat waves are nothing new on planet Earth; neither are record cold waves. In fact,  climate change is as old as the Earth itself.
Allow me to get nerdy for a moment, and let’s assume (like most present day researchers) that Earth has been around for millions of years.
Earth’s climate has changed multiple times over these many years, and there have been times when carbon dioxide (CO2 ) levels were incredibly higher than today. Evidence for this significant climate change is preserved in a wide range of geological settings, including marine and lake sediments, ice sheets, fossil corals, stalagmites, fossil tree rings, and even the colorful layers of rock and dirt found in the walls of the Grand Canyon.
Earth’s climate has been gradually cooling for most of the last 50 million years. At the beginning of that cooling (in the early Eocene epoch), the global average temperature was about 6 to 7 ºC warmer than today. Can’t blame fossil fuels for that!
About 34 million years ago, at the end of the Eocene, ice caps came together to form a continental ice sheet on Antarctica. In the northern hemisphere, as global cooling continued, ice caps and mountain glaciers gradually gave way to large ice sheets around 2.6 million years ago.
Over the past 2.6 million years (the Pleistocene and then the Holocene epoch), Earth’s climate has been on average colder than today, and often much colder. That period is known as the “Ice Age”, a series of glacial episodes separated by short warm interglacial periods that lasted between 10,000-30,000 years. We are currently living through one of these interglacial periods.    The present warm period in which we currently live (the Holocene) became established only 11,500 years ago. Since then our climate has been relatively stable and although we currently lack the large Northern Hemisphere ice sheets of the Pleistocene there are of course still large ice sheets on Greenland and Antarctica.
This epoch has been ideal for human life with the tropics and temperate areas able to produce vast amounts of food when managed properly. In fact, the slight warming we have experienced since the mid-1800s (about 1 degree Fahrenheit) has allowed the farming zones to expand, which has better served a growing population.
More nerdy stuff: it should be noted that relatively rapid global warming has occurred in the past. About 55 million years ago, at the end of the Paleocene, there was a sudden warming event in which temperatures rose by about 6 °C globally and by 10-20 °C at the poles. Again, there were no cars or coal plants to make this occur. Carbon isotopic data show that this warming event (called by some the Paleocene-Eocene Thermal Maximum) was accompanied by a major release of 1500-2000 billion tons or more of carbon ( and 5550-7400 billion tons or more of CO2) into the ocean and atmosphere; man, many times higher than today. It took the Earth’s climate around 100,000 years to stabilize. Remember, carbon dioxide has a cycle just like water does, only it’s much slower.
As for the warming over the last 11,500 of years: it will all come to a halt and eventually this earth will become uninhabitable.
Why?
On January 3rd, 2019, Earth reached the point in its orbit where it was closest to the Sun: the perihelion. Every object orbiting a single mass (like our sun) makes an ellipse, containing a point of closest approach that’s unique to that particular orbit.
But there’s something you may not expect or appreciate that nevertheless occurs: Earth’s orbital path doesn’t remain the same over time, but spirals outward.  In 2019 our perihelion was 1.5 centimeters farther away than it was last year, which was more distant than the year before. This drifting will continue. It’s not just Earth, either; every planet eventually drifts away from its parent star.
Associated with this are the Milankovitch Cycles.  These cycles describe the effects of the shape of the Earth’s orbit (eccentricity), the angle of the Earth’s axis with respect to the Earth’s orbital plane (obliquity), and the direction of the Earth’s axis of rotation as just described (precession).
Earth is currently exiting the ideal cycles and is moving in a direction that will eventually allow the global climate quite miserably cold.
Humans certainly are able to influence weather—the day to day stuff that makes the headlines. Heck, we’ve been seeding clouds to produce make rain come or go, and urban heat islands are widely acknowledged, but we are incapable of altering the climate. The orbit of the Earth around the Sun, the predictable timing of the sunrise and sunset, the perfect nature of the tides, the currents of the oceans, the prevailing winds, not to forget the eruption of volcanoes and the gargantuan amounts of methane gas produced by termites, all keep the Earth’s massive climate from machine from failing to do its own thing.
You see, God made the heavens and the earth. He put it all in motion for us.
His counterfeit counterpart, Satan, has caused people to believe they can control what God has created. It’s actually quite arrogant for we mere mortals to believe we can alter a major facet of God’s mighty creation.