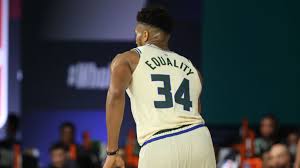 I was at my oldest son’s house last night and in the background on the big screen was a National Basketball Association game between the Houston Rockets and the Dallas Mavericks. I knew the NBA was all-in for the anti-American, pro-anarchy, anti-Biblical morality, fundraising tool of the Democrats, Black Lives Matters movement, but I gave a few glances at the TV anyway.
What a slap in the face to sports fans. What a slap in the face to reality.
Throughout the modern era of sports in America, we have watched the games and cheered for our teams in large measure to escape the rigors of day-to-day life. You watched because for the next two hours you can forget about work, your bank account, your personal problems, and politics. By embracing Black Lives Matters, the NBA (along with Major League Baseball and National Football League) are slapping the face of the their fan base.
Forget the fact that the stands are empty because of the coronavirus. One could make the argument those stands would be replete with a lot of no-shows even in a COVID-free USA. Just look at the television ratings from these games. It’s pathetic.
We don’t want to see BLACK LIVES MATTER emblazed on the hardwood court. We don’t want to see the silly patches on the referees shirts proclaiming, “Officials for Social Justice.” We don’t want to hear the announcers at halftime lecturing us how important this cause is. And we don’t want to see those RIDICULOUS jerseys the players are wearing that substitute their name on the back for a slogan like, EQUALITY.
Equality? What a slap in the face to reality. The average player in the NBA makes $6.6 million dollars this season. The highest paid players are making 20 to nearly 40 million dollars this year. I wonder how many of these players are making a statement by giving away 90% of their income to the poor. That would leave the average player with $660,000 a year to spend for himself.
Or how about this? Maybe these players could get together and use their fame to rally Nancy Pelosi’s House of Representatives to craft a Declaration finally declaring, “We hold these truths to be self-evident that all men* are created equal.”
Now that would be a game changer.
I’m working on a podcast about this. Stay tuned.
* The individual as representing the species, without reference to sex.
Posted in Category: Commentary, News, Tagged: