This isn’t about race or police brutality… 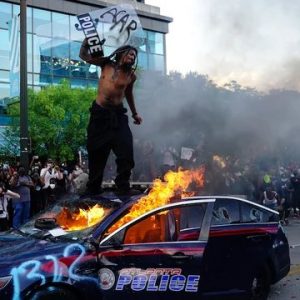 I just concluded a ZOOM Bible study (that I am honored to host) with men from all over the world (including the Middle East, Eastern Europe, and East Africa). They all agreed that the violent protests we are witnessing in America are not based in racial discord or police brutality. These savage demonstrations are rooted in lawlessness and anarchy. They are also, these men believe, a sign of worse things to come.

“Concerning the coming of our Lord Jesus Christ and our being gathered to him…Don’t let anyone deceive you in any way, for that day will not come until the rebellion occurs and the man of lawlessness is revealed, the man doomed to destruction. He will oppose and will exalt himself over everything that is called God or is worshiped, so that he sets himself up in God’s temple, proclaiming himself to be God” (2 Thessalonians 2:1-4).

Figure out which team you’re on, because this will eventually get really messy.

Credit to my friend Matt Drudge for photo.