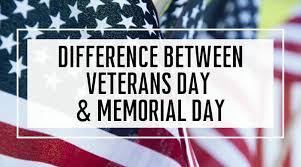 Sadly, too many Americans cannot distinguish between Veterans Day and Memorial Day. These holidays do not represent a Thursday off or an end-of-summer barbecue.

Veterans Day, formerly known as Armistice Day, was originally set as a U.S. legal holiday to honor the end of World War I, which officially took place on November 11, 1918. In legislation that was passed in 1938, November 11 was “dedicated to the cause of world peace and to be hereafter celebrated and known as ‘Armistice Day.'” As such, this new legal holiday honored World War I veterans.

In 1954, after having been through both World War II and the Korean War, the 83rd U.S. Congress — at the urging of the veterans service organizations — amended the Act of 1938 by striking out the word “Armistice” and inserting the word “Veterans.” With the approval of this legislation on June 1, 1954, Nov. 11 became a day to honor American veterans of all wars.

In 1968, the Uniforms Holiday Bill ensured three-day weekends for federal employees by celebrating four national holidays on Mondays: Washington’s Birthday, Memorial Day, Veterans Day, and Columbus Day. Under this bill, Veterans Day was moved to the fourth Monday of October. Many states did not agree with this decision and continued to celebrate the holiday on its original date. The first Veterans Day under the new law was observed with much confusion on Oct. 25, 1971.

Finally on September 20, 1975, President Gerald R. Ford signed a law which returned the annual observance of Veterans Day to its original date of Nov. 11, beginning in 1978. Since then, the Veterans Day holiday has been observed on Nov. 11.

Memorial Day honors service members who died in service to their country or as a result of injuries incurred during battle. Deceased veterans are also remembered on Veterans Day but the day is set aside to thank and honor living veterans who served honorably in the military – in wartime or peacetime. It was established on October 8, 1954 by President Eisenhower, a former five star Army General who played a significant  role in the Normandy Invasion and the Invasion of North Africa in WWII.