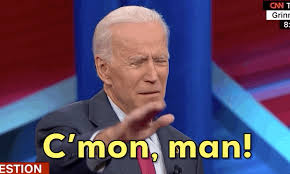 Right. Like any Federal investigation of voter fraud would prove positive?

With the Democrats in control of the White House and half of Congress?

Here’s the latest: Federal agencies investigating foreign influence in the 2020 presidential election have concluded that they “have no evidence that any foreign government-affiliated actor prevented voting, changed votes, or disrupted the ability to tally votes or to transmit election results in a timely manner, altered any technical aspect of the voting process, or otherwise compromised the integrity of voter registration information of any ballots cast during 2020 federal elections.”

Heck, foreign governments didn’t have to interfere; the Democratic Party and their henchmen were doing it on their own.

The Department of Justice, Homeland Security stated: “We have no evidence—not through intelligence collection on the foreign actors themselves, not through physical security and cybersecurity monitoring of voting systems across the country, not through post-election audits, and not through any other means—that a foreign government or other actors compromised election infrastructure to manipulate election results.”

So what about claims of domestic interference?

Nothing to see here, folks. Even though Michigan Court of Claims Chief Judge Christopher Murray ruled (last week) that Michigan Secretary of State Jocelyn Benson (Democrat, of course) broke state law by unilaterally issuing rules and “guidance” regarding absentee balloting there’s nothing to see here, folks.  Even though a complaint was filed a month before the election that Benson unilaterally eliminated effective signature validation of mail-in ballots which allowed “invalid votes to be counted” the media titans remain silent. Fortunately, the court is about to rule that Benson’s actions were illegal.

Nonetheless, I guarantee you if that if this subject is brought up before the TV talking heads they’d mimic Good Ol’ Joe–“C’mon, man!”

Meanwhile, in response to a December lawsuit filed in Atlanta, Georgia, Superior Court Judge Brian Amero signaled he could unseal Fulton County’s absentee ballots for an investigation by an independent third party. If so, the ballots could call into question the 2020 presidential and senatorial election results in that state.

The real question is, even if there was fraud that could have tipped Michigan and Georgia to Trump, the election has been certified (a sarcastic Thank you to Mike Pence). Biden still wins 274 to 264, but what about fraud in other states?

Normally I would say, if laws were broken there must be accountability, but I guess not in this case. Instead the left tells us to Shut up and quit the conspiracy theories.

And then there’s Leviticus 19:11, Do not steal. Do not lie. Do not deceive one another.