Why Trump Will Be Re-Elected 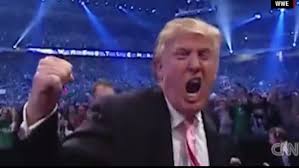 Donald Trump will be re-elected President of the United States.

For the past several weeks I’ve been skipping across the country visiting friends, family, and taking care of some personal business.  As I wrote in a recent post, I was in Washington DC for the 68th annual National Prayer Breakfast and was able to see Mr. Trump live and in person.  What I didn’t share in that post were the comments from three of the taxi drivers I had in DC.  One was from South America, two were from Africa. All three were first generation U.S. citizens and all three were Trump supporters.

I was in central Illinois and witnessed more pro-Trump yard signs and banners than I ever imagined. Same thing in Missouri and Kansas. Some critics might say, “Duh. You were in the Midwest.” I would reply, “Yes. And they have electoral votes in the Midwest.”  They are also super enthusiastic about their President’s efforts to drain the swamp, destroy Islamic terrorism, and strengthen our economy.

But there’s something more concrete to look at: this week’s New Hampshire primary. While all media eyes have been focused on the mess taking places places amongst the democrat candidates, no one has focused on Donald Trump.  He too was on the ballot in New Hampshire, for all practical purposes running unopposed. If you are a Trump supporter, why even show up to vote–UNLESS YOU WANTED TO MAKE A STATEMENT in that otherwise moderately liberal state.

Indeed, that’s what happened. Trump’s support was beyond enthusiastic in New Hampshire.

In 2012, running for his shoe-in second term Barack Obama received 49,080 votes. This week President Trump received 118,774 votes!  That kind of support has NEVER been seen in New Hampshire before. The next closest was Bill  Clinton in 1996 with 76,797 votes.

Is there a Democrat in the field who can boast this enthusiasm? Some might say Bernie Sanders can, but let’s look at the  numbers. Keep in mind, Sanders is from the state next door, Vermont. In 2016, while running against Hillary, Sanders got 60 percent of the democrat vote–not bad at all.  This week he got a paltry 25 percent of the vote. Hardly exciting. And with 25-percent, he won on the democrat side.

Another stat: if you total ALL of the democrat votes split between the six candidates (and this was for all intents and purposes a democratic primary), the total number of people voting democrat came to 209,000. Trump’s nearly 119K votes is unreal.

The democrats are hosed and , accordingly, are messing their pants.

Let’s get down and dirty for a moment: