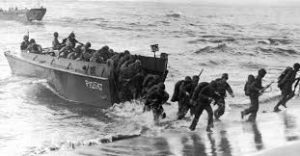 June 6, 1944. 77 years ago today.  2,499 unbelievably brave Americans, whose average age was 20, gave their lives to end the worst scourge the planet has ever seen on Omaha and Utah Beaches. These men were part of  more than 160,000 Allied troops who stormed the beaches of Normandy, facing a torrent of gunfire, artillery shells and bombs. In addition to the American lives, 10,000+ Allied troops were killed. Against all odds, by the end of the day, the liberation of Europe had begun. Satan’s plan to conquer with the world with Nazism was to fail.

There aren’t enough words that any of us could speak that would possibly be enough to thank all the men that fought on D-Day.

God bless our military and our incredible country.

May a wave of revival sweep this land.