Bible Study: Being a Disciplined Disciple – Training to Triumph 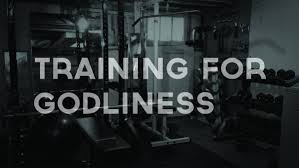 As I was preparing for the men’s Bible Study I oversee I know I heard God say he wanted me to prepare a study on discipline.

So, I launched into research on the consequences of sin and disobeying God’s Word.

True, there ARE consequences to our sin (and sometimes harsh consequences), but the Lord was not interested in talking to my men about that.

Instead He wanted to discuss self-control, self-restraint, and preparation.  The kind of stuff that builds character.

The kind of stuff that will make us a more effective soldier on the battlefield during the challenging times.

With that in mind, here’s what I’ve put together for my guys. It’s longer than most of our studies (I like to get the men in and out in an hour) so we’ll likely dig into this one for a couple weeks.

Please feel free to use this for your personal study, or to share with a group of friends!

No discipline seems pleasant at the time, but painful. Later on, however, it produces a harvest of righteousness and peace for those who have been trained by it  (Hebrews 12:11 NIV).

As disciples of The Messiah, God calls us to be disciplined in order to build character into our lives and train us to be effective messengers of the Gospel.
This study is designed to enlighten, encourage, and equip us to be the mighty men our Father desires us to become.

Discipline Through the Hard Times
– Endure hardship as discipline; God is treating you as his children. For what children are not disciplined by their father?(Hebrews 12:7).
– Join with me in suffering, like a good soldier of Christ Jesus (2 Timothy 2:3).

Question: How has God used various forms of personal hardship to build your character?

Testing our Faith, Building Perseverance
– Consider it pure joy, my brothers and sisters,  whenever you face trials of many kinds, because you know that the testing of your faith produces perseverance. Let perseverance finish its work so that you may be mature and complete, not lacking anything (James 1:2-4).
– …we also glory in our sufferings, because we know that suffering produces perseverance (Romans 5:3).
– Therefore, among God’s churches we boast about your perseverance and faith in all the persecutions and trials you are enduring (2 Thessalonians 1:4).

Questions: How have “trials of many kinds” tested your faith?  How were you able to endure those trials?
Why is perseverance an important element to our faith?

Discipline through Temptation
No temptation has overtaken you except what is common to mankind. And God is faithful; he will not let you be tempted beyond what you can bear. But when you are tempted,  he will also provide a way out so that you can endure it
(1 Corinthians 10:13).

Discipline: The Follow Through
– Do not merely listen to the word and so deceive yourselves. Do what it says. Anyone who listens to the word but does not do what it says is like someone who looks at his face in a mirror and, after looking at himself, goes away and immediately forgets what he looks like (James 1:22-24).

Question: How do we become men who apply the Word of God into all aspects of our lives?

Discipline: Training to Slay Giants
David had undergone years of hard discipline and training prior to facing off and slaying Goliath. This account from 2ndSamuel is meant to encourage and equip us for all of the battles we may face:
King Saul says to young David: “You are not able to go out against this Philistine and fight him; you are only a young man, and he has been a warrior from his youth.” But David said to Saul, “Your servant has been keeping his father’s sheep. When a lion or a bear came and carried off a sheep from the flock, went after it, struck it and rescued the sheep from its mouth. When it turned on me, I seized it by its hair, struck it and killed it. Your servant has killed both the lion and the bear; this uncircumcised Philistine will be like one of them, because he has defied the armies of the living God. The Lord who rescued me from the paw of the lion and the paw of the bear will rescue me from the hand of this Philistine” (2 Samuel 17:33-37).

Questions: What positive discipline was instilled into your life even prior to coming to know Jesus as Savior?
Were there poor disciplinary traits that God had to remove once you yielded your heart to Him?
What Goliaths are attempting to stand in the way of the plan God has for your life?