Confronted by the True Nature of God 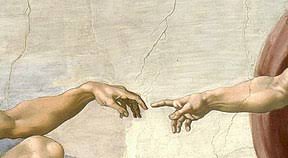 A lot of people who are not formally religious would agree that there is something–some supreme power–that either created the universe, or created and in some way is acting as a higher power that perhaps we can draw energy, purpose, and happiness from.  Ask what happens we die, and many of these people say we will finally be at one with the universe, or something like all of that.

I just finished a booklet written in 1943 by C.S. Lewis entitled, Mere Christianity. In it Lewis presents a very thoughtful passage that I would like to share about that unseen power, or as he refers to it, “Somebody.” I’ve transcribed the portion word-for-word; the only changes I have made are paragraph formatting to hopefully make the section easier to comprehend for the modern reader.

For those of you who are searching for the truth, perhaps this will help you.

By the way, the image I am using in this post is The Creation of Adam,  by Michelangelo.
——————

The other bit of evidence is that Moral Law which He has put into our minds. And this is a better bit of evidence than the other, because it is inside information. You find out more about God from the Moral Law than from the universe in general just as you find out more about a man by listening to his conversation than by looking at a house he has built.

Now, from this second bit of evidence we conclude that the Being behind the universe is intensely interested in right conduct -in fair play, unselfishness, courage, good faith, honesty and truthfulness. In that sense we should agree with the account given by Christianity and some other religions, that God is “good.”

But do not let us go too fast here.

The Moral Law does not give us any grounds for thinking that God is “good” in the sense of being indulgent, or soft, or sympathetic. There is nothing indulgent about the Moral Law. It is as hard as nails. It tells you to do the straight thing and it does not seem to care how painful, or dangerous, or difficult it is to do.

But it may still be very unlike a Person.

If it is pure impersonal mind, there may be no sense in asking it to make allowances for you or let you off, just as there is no sense in asking the multiplication table to let you off when you do your sums wrong. You are bound to get the wrong answer. And it is no use either saying that if there is a God of that sort-an impersonal absolute goodness-then you do not like Him and are not going to bother about Him. For the trouble is that one part of you is on His side and really agrees with His disapproval of human greed and trickery and exploitation. You may want Him to make an exception in your own case, to let you off this one time; but you know at bottom that unless the power behind the world really and unalterably detests that sort of behaviour, then He cannot be good.

On the other hand, we know that if there does exist an absolute goodness it must hate most of what we do.

That is the terrible fix we are in.

If the universe is not governed by an absolute goodness, then all our efforts are in the long run hopeless. But if it is, then we are making ourselves enemies to that goodness every day, and are not in the least likely to do any better tomorrow, and so our case is hopeless again.

Some people talk as if meeting the gaze of absolute goodness would be fun. They need to think again. They are still only playing with religion.

Goodness is either the great safety or the great danger-according to the way you react to it. And we have reacted the wrong way.

Now my third point. When I chose to get to my real subject in this roundabout way, I was not trying to play any kind of trick on you. I had a different reason. My reason was that Christianity simply does not make sense until you have faced the sort of facts I have been describing. Christianity tells people to repent and promises them forgiveness. It therefore has nothing (as far as I know) to say to people who do not know they have done anything to repent of and who do not feel that they need any forgiveness.

It is after you have realised that there is a real Moral Law, and a Power behind the law, and that you have broken that law and put yourself wrong with that Power-it is after all this, and not a moment sooner, that Christianity begins to talk.