For those of you listening to my Another Chance Podcasts, you’ve probably noticed something that all of my interviewees have experienced: God spoke to them. For some it was audibly, for others it was voice between their ears that was so pronounced,  it may as well have been audible.  That said, I love this story… 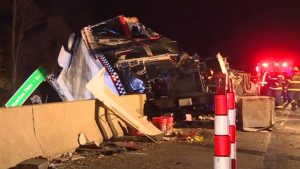 Jordan Cole and Kenneth Bryant were traveling to a pastor’s conference, along with other men, when their MudMan Food Truck, part of a non-profit that sells hamburgers to raise money for Potter’s Field Ministries, broke down and led to their divine encounter.

“We heard a voice,” Cole told FOX 8 Cleveland, “and it was to get out of the truck and I look down and I saw a semi swerving toward us.”

They were both in different parts of the vehicle, but both felt urged to get out – and did so with seconds to spare.

Ohio State Highway Patrol troopers said the men most likely would’ve died had they stayed in the vehicle. The truck driver survived the crash as well, suffering minor injuries.

“We’ve come to the conclusion that it was Jesus,” Bryant said. “He allowed this to happen for me to be able to share this story…for people to know that our Heavenly Father is mindful of us.”

And in this Christmas season especially, they hope their experience inspires others.

“There is a purpose for your life, you do have a reason to be living and it’s God’s perfect timing,” Bryant added.

The Potter’s Field Ministries, which helps children around the world, shared the good news that “the Lord protected the lives of everyone involved,” pointing to Genesis 50:20:
“But as for you, you meant evil against me; but God meant it for good, in order to bring it about as it is this day, to save many people alive.”