Love is Blind: visiting the place where I met and proposed to my wife 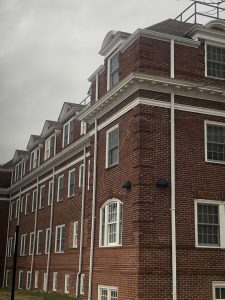 On a trip across the US to visit some of the places where God did something wondrous in my life.

This photo is of the dormitory that was next to the dorm in which my wife lived for four years while attending Stephens College in Columbia, Missouri (I was at the University of Missouri). Her dorm, South Hall, has since been torn down, but this one is EXACTLY like it, and is about 30-yards away.

I first laid eyes on my future bride while she sat on the steps of South Hall. I also proposed to her beneath a tree in front of the dorm. It’s a super special place and I was an emotional basket case when I visited it today.

After visiting hours I would often leap up to the first rung of an old rickety fire escape on the north side of the building, pull myself up to the ladder and climb up to a thin, white ledge that wrapped around the fourth floor. Then I would very carefully shuttle along the ledge, maneuver around two corners like Spiderman, and move past two windows until I reached her room. Once there, she and her roommate would pull me in through the window.

Unless you know my wife you won’t believe this but it’s true: there was NO hanky-panky going on. I’d go up (as some of you former Stephens ladies know) and just hang out with the girls after the 10PM curfew. Go figure–those were truly some of the best times of my college life!

Now, LOOK AT THAT LEDGE! It’s about a foot wide. It’s proof that love is blind. I coulda been killed!

Looking back, it was all worth it: 42-years of marriage, 4 awesome kids, and faith in God.

PS: Please note that my old roommate, Jim Stewart, can confirm all of these facts (and he did on my private Facebook page) as he was the guy who was responsible for me meeting my wife (and he too walked that ledge).