The following is an excerpt from my book, “Eco-Tyranny: How the Left’s Green Agenda Will Dismantle America” (2012, WND Books).  I’ve also shared this story in Episode 40 of my Hidden Headlines Podcast (July 4, 2019). 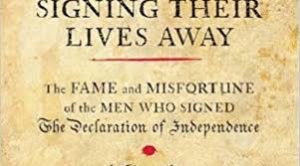 Francis Lewis was born in Wales in 1713.  He was orphaned at the age of five and raised by relatives. After a college education in London, he became a business apprentice and earnestly saved his money.  At the age of 21, he set sail for New York where he established an importing business.

In 1756, during the French and Indian War, Lewis was a special aid to the British forces, supplying them with uniforms and other critical supplies.  He was on business at Fort Oswego, when a bloody battle broke out against the French aggressors.  Lewis was taken prisoner and sent to France aboard a ship, cruelly housed in a wooden box.  Upon his release at the close of the war, Lewis was rewarded for his service to the crown with 5,000 acres of land in New York.

Again, while one might think that such a man would be forever loyal to Great Britain, such was not the case for Lewis.  He saw how the edicts from England were strangling freedom in the colonies, and, according to Lossing, Lewis held dearly to “his republican views.”

Lewis’ wife Elizabeth was also a devout patriot and fervently supported her husband when he was elected a delegate to the General Congress in 1775 and signed the Declaration of Independence in Philadelphia the following year.  Once the Declaration was signed, the British placed a price upon the head of Francis Lewis.  Before he was able to reach his home on Long Island, ground troops and a warship were sent to seize his wife and destroy his property.  Elizabeth watched from a balcony as a cannon ball crashed into a wall immediately next to her.  Immediately a servant shouted, “Run, Mistress, run!”[1]

Mrs. Lewis calmly replied, “Another shot is not likely to strike the same spot,” and she did not budge.

The soldiers soon entered the home and destroyed all books, papers, and ruthlessly pillaged the entire property.  Elizabeth Lewis was taken to New York and thrown into prison.  She was not allowed a bed or a change of clothing, and given little to eat.  A former family African servant discovered her location and was able to smuggle some small articles of clothing and some food to her.  He also reported her whereabouts and condition to Congress.  Demands were made for her better treatment, but the British were determined to make an example of Mrs. Lewis’ prominence and wealth.

Finally, General Washington was able to broker a prisoner exchange, and Elizabeth was able to join her husband in Philadelphia. However, it was plain to everyone that because of her mistreatment, she was broken in health and was slowly sinking into the grave.  Francis Lewis soon asked for a leave of absence from Congress to devote his whole time to his wife.  She died in 1779.

Grief-stricken, Lewis retired from Congress to live with his sons.  This great patriot died in 1802 at the age of 89 in New York City.  He was buried in an unmarked grave in the yard of Trinity Church.