Shana Tovah! One Year Closer to the Messianic Age 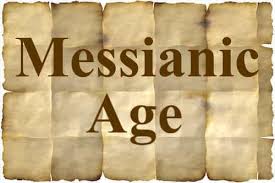 “But do not let this one fact escape your notice, beloved, that with the Lord one day is like a thousand years, and a thousand years like one day,” the Apostle Peter, writing in the New Testament’s Book of 2 Peter, 3:8.

I’m presenting this on Rosh Hashanah, the Jewish New Year. While our traditional calendar reads “2022” (which signifies the number of years since the death, burial, and resurrection of Jesus the Messiah and only more recently has been deemed by secularists as the counting of years in the so-called, “Modern Era”), the Jewish calendar tells us we are entering the 5,783 year since the creation of the first humans, Adam and Eve.

I don’t ascribe to this holiday from a superstitious religious perspective. Maybe somewhere along the line in human history (due to war, persecution, or even the Great Flood of Noah’s time) the counting of years was thrown off,  but I  truly believe that some 5,783 years ago it was spoken:

26“Let Us make mankind in Our image, according to Our likeness; and let them rule over the fish of the sea and over the birds of the sky and over the livestock and over all the earth, and over every crawling thing that crawls on the earth.” 27 So God created man in His own image, in the image of God He created him; male and female He created them (Genesis 1:26,27 NASB).

“Us” has always been a mystery to some, but looking at the Bible in context we see the beautiful mystery revealed.

Commentators often refer to the “Us” in Genesis 1:26 as angels, a plural of majesty, or a divine plurality.

It must by pointed out that “Us” is not angels helping God make humans. Man and woman are said to be created “in the image of God,” not in the image of angels.

Us is, quite directly,  is The Father, Messiah, and Holy Spirit.

As for those who believe the earth is billions of years old, I have no problem with that deeply held position in that I have no idea what went into the creative process prior to the conception of Adam and Eve.

But to restate,  I do believe it has been some 5,783 years since God created the first human souls. The first chapter of Genesis ends with this:
And God saw all that He had made, and behold, it was very good. And there was evening and there was morning, the sixth day [verse 31].
In the very next chapter we read:
And so the heavens and the earth were completed, and all their heavenly lights. 2 By the seventh day God completed His work which He had done, and He rested on the seventh day from all His work which He had done. 3 Then God blessed the seventh day and sanctified it, because on it He rested from all His work which God had created and made.
Now for the crux of this post.  If “a day is like a thousand years” to the Lord, time is racing towards the 6,000 year mark of human history. Six thousand years of mostly turmoil, following the sin of Adam and Eve and the loosing of Satan on planet earth. Thank God He sent His son as a sacrifice for our sins and placed within us His Holy Spirit. We read in the New Testament Book of Colossians. 1:13-20 –

For He rescued us from the domain of darkness, and transferred us to the kingdom of His beloved Son, 14 in whom we have redemption, the forgiveness of sins.

15 He is the image of the invisible God, the firstborn of all creation: 16 for by Him all things were created, both in the heavens and on earth, visible and invisible, whether thrones, or dominions, or rulers, or authorities—all things have been created through Him and for Him. 17 He is before all things, and in Him all things hold together. 18 He is also the head of the body, the church; and He is the beginning, the firstborn from the dead, so that He Himself will come to have first place in everything. 19 For it was the Father’s good pleasure for all the fullness to dwell in Him, 20 and through Him to reconcile all things to Himself, whether things on earth or things in heaven, having made peace through the blood of His cross.

But again, back to my main point.
Religious Jews of all stripes believe that Messiah is returning, and so do authentic followers of Jesus. When He returns both camps believe Messiah will establish a wonderful, peaceful, Messianic Age that will stretch for 1,000 years.
Is it possible, as many religious Jews believe, that just as God rested on the Seventh Day, so shall humankind rest for one-thousand years during the Millennial Reign of Messiah?
In other words, we’ve seen six days of human life on earth (“a day is like a thousand years”), and the Day of Rest is coming.
If that is the case, then the clock is quickly ticking before He returns!
Shana Tovah!  Happy New Year!
Posted in Category: Faith, Tagged: