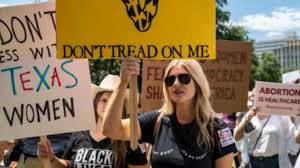 Finally, some great news coming out of Washington, D.C.

The U.S. Supreme Court, in a decision that was delayed long enough to allow a new Texas abortion ban to take effect, has decided to allow the state requirements to stand pending further court review that is expected to happen in coming months.

The 5-4 majority in the decision included the three justices appointed by President Trump, and left members of the minority complaining about the violation of the U.S. Constitution because of their own perception of a “federal constitutional right” to abortion.

Gripe all you want, you “pro-choice” assassins. This was a big victory for President Donald Trump, who appointed three of the justices, and sent shockwaves through the left,

By the way, the constitutional issue is already is on the SCOTUS docket for later this year when a major ruling is expected on another abortion ban, this one from Mississippi, that could be used to undermine, or even overturn, the original 1973 Roe v. Wade decision that created that “right” to abortion.

“Be ready to break some s—,” Love wrote on social media.

It’s a shame Love is incapable of living up to her last name.

The justices had failed to act on Tuesday and the law took effect on Wednesday. The opinion actually came out overnight going into Thursday, and might have been delayed because of the insistence by the four dissenters to each write their own opinion on the dispute.

Texas wrote the law specifically to make challenges difficult, as the routine for challenging a state law is to attack those officials charged with enforcement. But Texas allows each and every citizen to be responsible for enforcement, through lawsuits by them and against those offering or providing abortion or abortion services.

Let us pray for the total elimination of Roe v Wade.