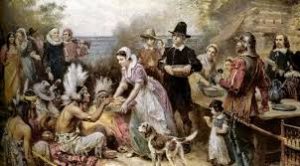 Miracle #1 – It was November 1620. The Pilgrims’ ship, the Mayflower, accidentally sailed right past the natural harbor in which they planned to land. Good thing.   Hostile natives had seen the boat offshore and were waiting to ambush the ship and its 102 passengers.

Miracle #2 – As they explored another harbor farther north (Plymouth Rock) they discovered an even better situation—a fresh water river teeming with fish, a large flat, previous cleared 3-acre field for growing crops, and a high hill perfect for their cannon to ward off enemies.  A Native Indian tribe had previously developed the farmland, but the entire lot had succumbed to a recent plague. As a result, no native tribes wanted anything to do with the land for fear it was cursed.

Miracle #3 – That first winter of 1620-21 was a horridly cold one. The Pilgrims were hardly prepared and nearly half of the Pilgrim community perished from a variety of maladies. An Indian named Samoset shocked the Pilgrims by approaching them speaking broken English!  Samoset then introduced the Pilgrims to his friend, Squanto, who spoke perfect English.  Together, Squanto and Samoset helped the settlers survive after the first winter.

As opposed to the North American settlers farther south in Jamestown who had a slogan, “Damn your soul, grow tobacco,” the Pilgrims at Plymouth Rock were peaceful, God-fearing folks who had wonderful relationships with their native neighbors.  During that first Thanksgiving in November of 1621, the surviving English families had experienced great hardship and loss. Nonetheless, they fellowshipped with deep appreciation for their Indian friends and thanked God for all they had.

Here’s to the true spirit of Thanksgiving!