COVID-19, Nanotech Tattoos, and the Mark of the Beast 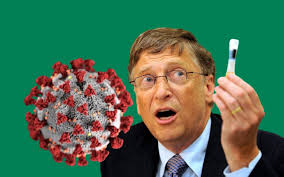 There is a passage in the Bible that has attracted the imagination of believers and non-believers throughout the ages. It involves a person referred to as “the beast,” a global dictator who will attempt to rule the world in the last days.

[He] also forced all people, great and small, rich and poor, free and slave, to receive a mark on their right hands or on their foreheads, so that they could not buy or sell unless they had the mark, which is the name of the beast or the number of its name (Revelation 13:16-17).

This passage (as well as other portions which name the beast, “Antichrist”) was written by a man named John; a disciple and close friend of Jesus.

Was John an original conspiracy theorist, or are we witnessing something today that is, in fact, prophetic truth unfolding before our very eyes?

What I present in this post is elaborated in greater detail in Episode 56 of my Hidden Headlines Podcast. I’m not pretending to have all the answers, but I am confident that there is more at play her than most realize.  That’s why I love asking potent questions.

I’m referring to COVID-19. Yes, I know it’s real; it took my 24-year-old son in Switzerland nearly five weeks to recover from his bout with the virus. Biologically, we know this cornonavirus is unique and, for a slim minority, deadly; a very good friend of mine lost his dad to the illness just last week.

New information regarding COVID-19 is flowing in daily, much of it purposely censored by the mainstream media. A blog post I published March 27 squarely laid blame on the virus’ eruption on China.  Days later a few big media outlets, as well as some conservative members of congress, also began to point the finger at China. However, at the time no one seemed to go as far as I did: I wondered if this disease was specifically created (perhaps with external aid) and launched by the communist government of China. Fortunately, many are now acknowledging this may have indeed been the case.

Since that post in late March we’ve all witnessed the astounding ways in which society has observantly stepped in line with the mandates made by the various government mechanisms worldwide. It’s now way more than facemasks and social distancing, and some of these new mandates and regulations are just plain senseless.  For example, I live near a broad, half-mile-long, public beach in California.  This time of the year there are very few people on that beach (like most of the beaches in northern California) and even if there were 500 people (which would be pushing it even in the summer) the beach is so expansive that social distancing would be the norm.  However, this beach, like all of them in the region, has been closed to people and is being patrolled by armed State Park officers driving up and down the sand in massive Ford pickup trucks.  Anyone found on the beach–even by themselves–will be ticketed with a $1000 fine.

Meantime, there’s narrow beach adjacent a steep cliff to the south of us that is accessible only by stairs. It’s also a super popular surf spot. Due to the coronavirus, all of the stairways are taped off and closed to the public. No surfing is allowed. However, the sidewalk that leads to the stairs and rims the edge of cliff is busy with walkers, runners, skateboarders and bicyclists.  Everyone seems to be keeping their distance from one another, except for those who are couples and families.  So, how long before the government outlaws the sidewalks?  And if/when they do, guess what?  I think everyone will just go along with the program.

This leads me to some statistics I tried to post on Facebook last week, but curiously the post was quickly taken down by Facebook’s thought police three times:

Perhaps it’s because fighting cancer and AIDS (remember there is no known cure for these diseases) is a big business that employs many thousands and requires drugs that make pharmaceutical companies and their investors lots of money?

And then there are the 11-million babies that have been aborted worldwide this year, a figure that delights the anti-population zealots.

Is there something more sinister at work?

Since that post, I’ve been thinking about the many very influential people in this world who believe there are too many humans on this planet (Microsoft’s Bill Gates, for example, hosts regular gatherings to discuss this issue).  These prominent persuaders see the bulk of humanity as peons who are incapable of making proper decisions that will benefit the whole.  As such, they desire to reduce the number of people on the planet for easier control and management of the masses. Read the literature of those who have espoused such views (Hegel, Malthus, Marx, Lenin, Ehrlich) and you’ll discover these anti-population zealots are also determined to eliminate personal freedom and civil liberties because they are convinced people like (you and) me are too irresponsible to enjoy such privilege.  In essence, these utopian progressives desire a new, globalized, one-world order fueled by a cashless society, empowered by a handful of massive corporations, and tightly controlled through artificial intelligence.

So, let’s talk about this coronavirus.

Bill Gates has been warning about a global pandemic for years, and his solution to the current crisis is developing a COVID-19 vaccine and then mandating its insertion in the entire human population.

In September 2019, just three months before the COVID-19 first appeared in China, at a summit held in New York City known as ID2020, sponsored in-part by Gates, a new project was announced involving the “exploration of multiple biometric identification technologies for infants,” based on “infant immunization.” The goal is to eventually have every person on the planet identifiable through a unique digital implant that could be updated with personal data over the course of one’s life.  I am not making this up. According to the ID2020 website, “In order for digital identities to be broadly trusted and recognized, we need sustained and transparent collaboration aligned around these shared principles, along with supporting regulatory and policy frameworks.”

For anyone who may be wondering what “broadly trusted and recognized” might look like, researchers at the Massachusetts Institute of Technology (MIT) have developed what is essentially a high-tech tattoo consisting of an invisible dye that has the ability to store data under the skin via nanotechnology. This unique mark would be delivered together with a vaccine, most likely administered by Gavi, the global vaccine agency that also falls under the umbrella of the Bill & Melinda Gates Foundation.

“The researchers showed that their new dye, which consists of nanocrystals called quantum dots… emits near-infrared light that can be detected by a specially equipped smartphone,” MIT News reported.

It’s interesting to note this study was funded by the Gates Foundation.

Now, think for a moment about what is occurring presently with this coronavirus social-distancing shutdown? When a vaccine is finally developed for this variation of the flu, getting the vaccination and showing proof that you have indeed received it might provide your only way to get on an airplane to travel.  Proving you have had the vaccination might be your only way to get into a stadium event, movie theatre, or any public venue. Even a day at the beach might require having your tattoo scanned by the State Park police.  Having a COVID-19 ID card is too clumsy and the potential for fraud too high. But a nanotech tattoo? Much more savvy, especially to the younger generation that has no problem relinquishing their personal privacy.

Let’s go back to Bill Gates. A couple weeks ago he was interviewed on CBS This Morning (interestingly, a show that employed me from 1987-1992).  CBS’s Anthony Mason asked Gates when we would be able to safely “open up” the country for business as usual again.

“What does ‘opening up’ look like,” Gates asked rhetorically. “Which activities, like schools, have such benefit and can be done in a way that the risk of transmission is very low, and which activities, like mass gatherings, maybe, in a certain sense more optional. And so, until you’re widely vaccinated those [activities] may not come back at all,”

According to Gates, anything that could be defined as a “mass gathering” would be considered an act of civil disobedience without a vaccine (the interview can be watched in its entirety here).

And then there is the exchange of cash.

Here in California, in the late-Nineties, I witnessed government bureaucrats successfully mount a campaign to diminish the use of paper bags in grocery stores because, they claimed, we needed to “save the trees.” Instead, we were persuaded to use recyclable plastic bags and if you wanted a paper bag you had to pay extra. Then, about ten years ago, they told us the plastic bags were not being properly recycled and were inundating the landfills; the new push was to convince shoppers to bring their own reusable bags. Now, during this current crisis, stores are turning away customers who bring in their reusable bags, demanding they use store-provided paper bags instead because the reusable bags are said to be filthy germ spreaders.

So, I ask this question: if reusable shopping bags are so dangerous, what about reusable coins and paper currency? Hence, the coming requisite for a high-tech tattoo, complete with the balance in your bank account, in order to buy and sell. I can hear the utopians now: “It will stop counterfeiting, money laundering, and other financial crimes.”

Sound overblown? Well, on March 24, Bill Gates was interviewed by Chris Anderson, the curator of non-profit that conducts the popular TED Talks. While discussing what the future would look like in a post COVID-19 world, he stated, “Eventually what we’ll have to have is certificates of who’s a recovered person, who’s a vaccinated person…Because you don’t want people moving around the world where you’ll have some countries that won’t have it under control, sadly.”

And what else might the global persuaders secretly incorporate into the vaccine to even better control the population?  After all, we can trust them–correct?