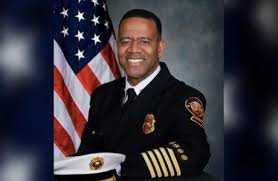 (World Net Daily) The city of Atlanta has agreed to pay $1.2 million to a fire chief who was fired for writing a Bible study.

The Alliance Defending Freedom said the city council voted on the payout to Fire Chief Kelvin Cochran after a court determined city rules requiring employees to obtain permission for such activity are unconstitutional.

The mayor of Atlanta terminated Cochran’s employment because of his Christian faith and beliefs, ADF said.

Mayor Kasim Reed had suspended Cochran for 30 days and announced he must complete “sensitivity training” after activists who oppose the fire chief’s Christian views on sexual behavior complained about a men’s devotional book Cochran had written on his personal time.

ADF explained biblical sexual morality is mentioned only briefly in the 162-page book.

When an investigation revealed Cochran did not discriminate against anyone, Reed fired him anyway.

As WND previously reported, Cochran sued the city after he was suspended and ordered to take “sensitivity training.” He ultimately was fired when a chapter in his book for men titled “Who Told You That You Are Naked?” was brought to the attention of a homosexual city council member and the mayor.

Cochran’s 162-page devotional book was developed from his teaching at his church.

“Plaintiff’s book was written primarily for Christian men and is intended to help them fulfill God’s purpose for their lives. According to plaintiff, one of the book’s goals is to guide men to live faith-filled, virtuous lives,” notes the court’s decision.