Classified Docs Next to Biden’s Corvette? 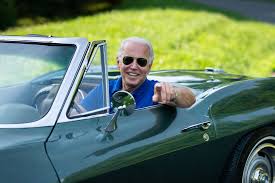 I personally think the establishment is now out to sink President Joe Biden.

Shortly after the statement came out, President Biden took to the press podium to attempt some mop up.  It failed miserably. Fox News White House Correspondent Peter Doocy asked Biden: “Classified materials next to your Corvette? What were you thinking?”

“Let me, uh — I will get a chance to speak on all this, God willing, soon,” Biden stumbled. “But as I said this week — and by the way, my Corvette’s in a locked garage, ok? So, it’s not like they’re sitting in the street.”

“So you’re saying it was in a locked garage?” Doocy asked.

Yes, as well as my Corvette,” Biden said.

The president continued: “But as I said earlier this week, people know I take classified documents and classified material seriously. I also said we’re cooperating fully and completely with the Justice Department’s review.”

I think this will be the end of the line for Joe’s presidency. There are too many questions with this document debacle for him to run in 2024. The establishment in D.C. knows Joe will have a tough time winning in 2024 and this could be a final straw to have him stand down, allowing someone like California’s governor Gavin Newsome to step in.

For example, some classified material was found at Biden’s D.C. office that was funded by the University of Pennsylvania, where the Chinese communist government gave millions and millions of dollars. Also, this leads back to Hunter Biden because the first wave of documents included documents about Ukraine at about the time that Hunter was getting hired by Burisma, the Ukrainian energy company, in large measure because he was the son of the vice president.

Constitutional scholar and legal commentator Jonathan Turley noted while Biden said he was “surprised” by being caught with the documents, “The rest of us should be astonished.”

“After all, it was Biden who expressed revulsion at the very thought of his predecessor possessing classified documents at Mar-a-Lago: ‘How that could possibly happen, how one anyone could be that irresponsible,'” Turley writes. “Biden is not the only one who appears hopelessly conflicted. With the reported discovery of a second batch of highly classified documents connected to President Biden, the decisions of Attorney General Merrick Garland are fast moving from the inexplicable to incomprehensible.”

These are seriously dysfunctional times in which we live, friends. All the more reason to pray.