Day of the Dead Voter 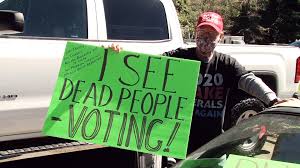 Even though most on the left side of the political spectrum declare there was no voter fraud in the 2020 Presidential election and further contend that voter integrity is not a genuine problem in the United States, the Public Interest Legal Foundation has filed a federal lawsuit against Michigan Secretary of State Jocelyn Benson for failing to take dead voters off the state rolls, and for failing to provide documents about those efforts.

The foundation said in a statement that it found more than 25,975 voters on Michigan’s registered voter list – even though they are dead.

For example, the foundation found one registered voter who, if alive, would be 108. Her obituary was found in the Detroit Free Press and an image of her gravestone was found online.

This is just another example of what is said to be occurring nationwide in cities and counties across much of America.