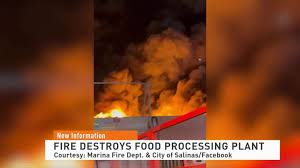 I recall the radical environmental organization that was in action during the Eighties and Nineties: Earth First.

It was as group composed of creeps that would set huge spikes into the redwood trees, hoping that lumberjacks would hit the spikes with their chainsaws, causing their saws to bounce back into their bodies and kill them.

Looks like a similar group of some sort is at it again. That’s my opinion.

My friends at Western Journal report of a massive fire on May 28 in Wright County, Minnesota, consuming a barn at an egg processing plant, killing tens of thousands of chickens. This farm produces three-million eggs a day.

This will impact the price of eggs in the midwest.

This comes after two more food processing plants exploded in flames the weekend of April 30.

No one was injured in the fire at a Perdue soybean plant in Norfolk, Virginia, according to WAVY-TV, and the cause had not yet been determined. The other occurred at Saladino’s food processing plant in Fresno, California, according to KFSN-TV.

This too will impact food prices, and a host of other products.

Even, ever-one-to-pander-to-conservatives, Tucker Carlson (he may be a nice enough guy, but obviously I’m not a fan of his TV show)  has been talking about these fires.

During his April 22 broadcast he remarked on the odd series of food processing plant disasters that have befallen facilities all across the nation and noted the oddity that two of these plants were hit by falling airplanes in the same week.

“A plane apparently crashed at a General Mills plant … in Covington, Georgia. Six tractor-trailers were reportedly on fire … This is the second time in a week that something like this has happened,” Tucker told his audience. “On April 14, a plane crashed into the Gem State processing plant in east Idaho. What’s going on here?” Tucker asked. “Well, the story gets weirder. Food processing plants all over the country seem to be catching fire,” he said.

Maybe some of this is purely accidental, but I’m placing my money on radical eco-terrorists at work in the name of Gaia (or Marx).