The Left boycotts Georgia over new voting law, yet continues cozying up to communist China 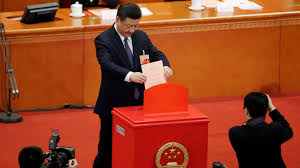 Opponents of a law that changed voting rules in Georgia are calling for boycotts of high-profile Georgia based companies, including Delta, Coca-Cola and Home Depot. Even the Major League Baseball’s All-Star Game, to be played this year in Atlanta, is considering taking to another city. The legislation’s opponents say the Atlanta companies didn’t do enough to defeat the measure; a measure that was sorely needed after last November’s Presidential voting disaster.

I’ll get to what the law actually does in a moment. But first, isn’t it interesting that the left wants to boycott Atlanta-based companies, while at the same time cozying up to communist China?!?!?!

China DOES NOT HAVE ELECTIONS. It’s a country run by a dictator, Oh, sure, they claim to have a congress. But any member who decides to truly vote independently within that body (when a “vote” is allowed) will be imprisoned faster than you could count to one.

China also has laws that allow for immediate imprisonment if suspected by authorities of sharing the Good News of Jesus as Savior. No trial required.

Opponents say the Georgia legislation, and similar measures being considered in other states, amounts to voter suppression efforts that will reduce minority voting. President Joe Biden has called the bill “Jim Crow in the 21st Century” and “an atrocity.”

Meantime, the propagandists in the media won’t tell you what’s really in Georgia’s new law.

The new law removes the secretary of state as the chair of the state elections board. (Former President Donald Trump and other Republicans have attacked the current Republican secretary of state, Brad Raffensperger, for refusing to accommodate Trump’s baseless claims about the 2020 election.) Instead, the law lets the state legislature — which has been under unified Republican control since 2005 — appoint a “nonpartisan” chair of the board.

And, under the new law, if a majority of the five-member board decides that a county’s elections officials have been doing their job poorly, the board can suspend those officials and replace them with one person the board has hand-picked to serve as a temporary superintendent, with the same powers the officials had.

The new law requires each Georgia county to have a minimum of one drop box for absentee ballots. In 2020, when drop boxes were used for the first time in Georgia, the boxes were authorized by special pandemic-related rules rather than by long-term legislation.

The new law also limits how many [Zuckerberg] drop boxes each county can have, how many hours and days the boxes can be open, and where they can be located.
The old law said early voting had to take place during “normal business hours” on weekdays, leaving counties to decide what counts as “normal.” The new law sets a specific time period, requiring early voting to be offered from 9 am to 5 pm. However, it also says that counties can open early voting as early as 7 am and end as late as 7 pm if they want to.
There was extensive media coverage of initial Republican proposals to eliminate or sharply reduce early voting on Sundays, when some Black churchgoers participate in “souls to the polls” voting drives. However, these proposals DID NOT make it into the final bill Kemp signed. Another example of fake news.
Finally, AND THIS HAS BEEN TOTALLY AND PURPOSEFULLY MIS-REPORTED:
The new law does away with the signature-matching system Georgia used to use to check the identities of absentee voters. Instead, voters will have to provide their Georgia driver’s license number, the number on their state identification card, or the last four digits of their Social Security number. If they don’t have any of that, they can provide one of several alternative forms of identification, such as a copy of a utility bill, bank statement or government check.
Meantime, try buying booze anywhere in the country without proper identification. Or open a bank account. Or even starting a PayPal account. And the list could go on and on…
Posted in Category: News, Tagged: