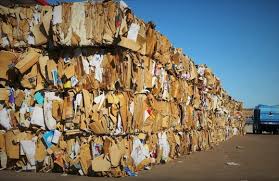 So what’s causing the closures?

In a nutshell, the biggest buyer of recycling material has been (for decades) China.  China doesn’t want or need our aluminum, plastic bottles, glass, or heavy plastics (PET) anymore. Part of it is they’ve got more than they need; the other part is the process of recycling is a major source of air pollution. According to the Environmental Protection Agency, about 66 million tons of materials are recycled in the US annually, and almost one-third of these materials typically get exported.  For the past three decades, almost half of the entire world’s used plastic has been sent to China.

Interesting isn’t it?  Environmental do-gooders in the USA have cut deals to sell our recyclables to China so we can feel good about recycling over here, while in the meantime the recycled materials cause pollution over there (which in turn supposedly changes the climate for all of us).

In 2017, it announced it would no longer be the “world’s garbage dump,” as the New York Times reported. put it.

Truth is, recycling is expensive and time-consuming. It requires a tremendous amount of water and energy, in addition to money and effort to build the proper infrastructure to do it properly. Also, due to the falling costs of oil prices, virgin plastic (made from oil) is actually cheaper to make than using recycled materials.

In the early ’90s, China saw a monetary opportunity to use its cheap labor. The country began buying recycled plastic, then had small factories in China use the scraps to create inexpensive, plastic exports like shoes, bottles, hoses, and gadgets. The US used to send 4,000 shipping containers of recycled goods to China a day.  As of 2016, China was importing 40 million metric tons of recycled goods annually, according to the United Nations.

But the Chinese government has recently has been steering the country away from low-value economic sectors like waste and is focusing more on higher-earning industries like tech. In the process of becoming the center of everyone else’s trash, the country has also been exposed to mercury, lead, and other dangerous substances contributing to pollution. Since January 2018, China has banned the import of most plastic and papers. It also tightened its restrictions on accepting other materials, like scrap metal. This ban has forced some of the world’s biggest companies to rethink plastic. Corporations including Procter & Gamble, Unilever, Nestlé, and PepsiCo have started using reusable packaging. The European Unionplans on placing a tax for plastic bags and packaging as a response to the Chinese ban, and grocery chains like Trader Joe’s are trying to minimize plastic usage.

As a result, more than 450 recycling centers in California have closed and more are expected to shut down in the coming year. The same thing is happening across the country.

By the way, it’s estimated that 44-percent of the junk we place in the recycling bin is unable to be recycled.  Soiled and greasy materials, plastic wrapping material, and plastic and glass that have contained hazardous fluids of all sorts are not recyclable.

California is one of 10 states that have recycling centers or redemption centers. When consumers buy beverages, they’re charged a five or ten-cent deposit. To recoup that deposit, consumers can return their empty bottles and cans to a recycling center. Activists in California are now concerned about the poor and homeless who roam streets and rummage through dumpsters looking for beverage containers which they can redeem at the centers.  California’s government is ridiculously considering creating a taxpayer-funded subsidy to keep these recycling centers afloat.

We are not running out of landfill space

Today, 1,654 landfills in 48 states take care of 54 percent of all the solid waste in the country. One-third of them are privately owned. Landfills are no longer a threat to the environment or public health.  State-of-the-art landfills, with redundant clay, impermeable liners, and leachate collection systems, have now replaced all of our previously unsafe dumps.

More and more landfills are producing pipeline-quality natural gas. Waste Management and other companies have turned waste sites into energy facilities. The new plants capture methane gas from decomposing landfill waste, which is then sold to local energy companies to create electricity for hundreds of thousands of homes.

Holding all of America’s garbage for the next one hundred years would require a space only 255 feet high or deep and 10 miles on each side.  Some of America’s finest urban parks, amphitheaters and golf courses rest atop former landfills.

We are not running out of landfill space.